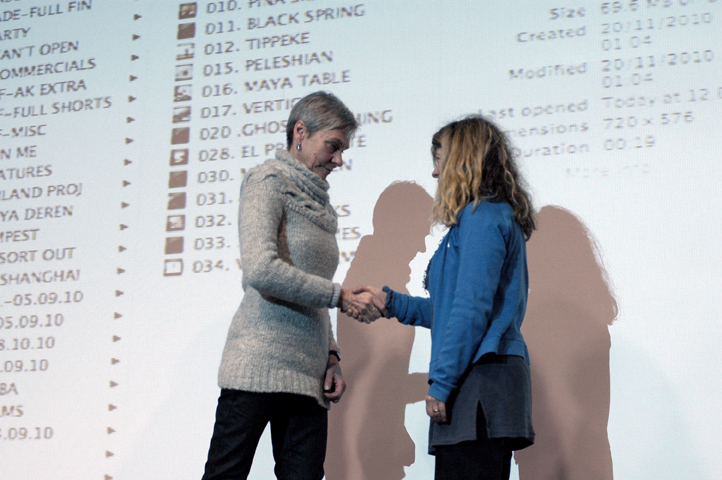 A Research Network Grant from the Arts and Humanities Research Council (UK) was secured in 2009 to establish a Research Forum for Discourse and Publication in Screendance. The group, composed of three American and five UK-based scholars and artists, is led by Claudia Kappenberg (Principal Investigator, School of Arts and Media, University of Brighton) and Sarah Whatley (Co-Investigator, Coventry University). Since its inception the Network has met four times, in Brighton (September 2009), Coventry (January 2010), Durham, North Carolina (June 2010) and again in Brighton (February 2011). During these seminars the group exchanged research interests, explored possible strategies for dissemination and established a new International Journal of Screendance. This Journal is published by the University of Wisconsin-Madison/ Parallel Press and was launched at the American Dance Festival at Duke University, North Carolina in June 2010.

To conclude the two-year research period of the Network Claudia Kappenberg and Sarah Whatley led a public symposium at the University of Brighton. The aim of the symposium was to meet with a larger research community, to encourage participation from younger researchers with interests in screendance, to disseminate the work of the Screendance Network and to invite guest speakers from related fields of practice in order to expand the parameters of the debates. Kappenberg and Whatley introduced the day by summarizing the developments of the last five years and inviting everyone to consider that ‘Screendance had not yet been invented’, a motto which is also featured on the cover of the first issue of the International Journal of Screendance.

The speakers were able to raise important questions about how screendance is ‘read’ and critiqued within different frameworks. Catherine Wood used the opportunity of the symposium to explore ideas about performance in the everyday as always already mediated, asking where screendance today begins or ends? She discussed the work of visual artists Dara Birnbaum, Mark Leckey, Bonnie Camplin, Catherine Sullivan and Keren Cytter as examples of how contemporary artists are responding to the increasing pervasiveness of media technology in the everyday. She argued that since the mid-seventies appearances and behaviour are more and more geared towards screen performance and that this in turn affects contemporary choreographic and cinematographic processes. Her insightful readings offered delegates tools for reading and responding to a range of work that had not previously been debated within the context of screendance. 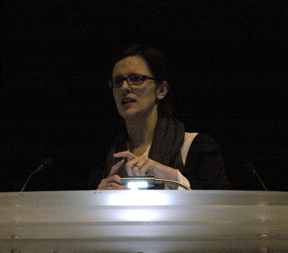 “Passages of our daily movement are constantly being captured, recorded, replayed and embedded in a whole other meta level of choreography of moving images, which is part of the everyday fabric.”

As Helena Blaker, independent curator and writer, commented, this was “a good start to the day with a new theoretical position that was in the process of being tested, specifically for this context and in response to the provocation created by Screendance.”

Following Wood’s curatorial perspective choreographer Siobhan Davies and filmmaker David Hinton shared a conversation about a forthcoming screendance collaboration, discussing their creative processes and interests in how they think they might be working together. As an established choreographer, Davies is curious about how the detail and particularity of the dancing body can move from a live space to a screen, and how that will inform and shift her thinking about dance. Hinton showed examples of work that demonstrated a cinematic aesthetic and reflected on aesthetic differences between live and mediated work.

Miranda Pennell and Anne Cooper Albright shared reflections on established theoretical texts which have been selected by the Screendance Network as providing a potential scaffolding for thinking and writing about screendance. Pennell discussed Laura Mulvey’s essay The Pensive Spectator, exploring the choreographic potential of the still image to animate the inanimate and with respect to her own work.1 Albright sketched key ideas of Heidegger’s seminal essay The Question Concerning Technology, exploring the etymological root, techné, as signifying both skill and a process of revealing whilst linking techné to epistemé, a way of knowing the world.2 Albright invited delegates to review the relation between dance techniques and media technologies, arguing that we are inevitably and irrevocably changed when “captured” and “processed” by imaging technologies and that screendance describes precisely this tension between embodiment and technology.

Delegate Karen Wood (PhD candidate, researching kinaesthetic empathy and screen dance audiences at the University of Manchester) noted how both speakers raised an important point in how our relationship with time is changing with digital technologies and “how this could open screendance up to creative, imaginative possibilities”. 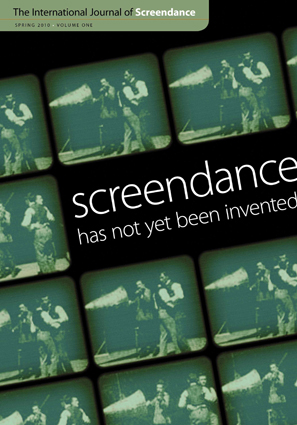 Front cover of the first edition of the International Journal of Screendance. Photograph by Lucy Cash 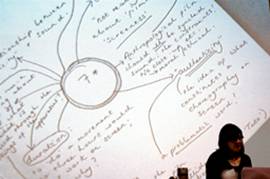 Elinor Cleghorn, one of the delegates contributing to the Open Space debate. Photograph by Lucy Cash

The presentations were followed by an Open Space debate, which was chaired by Sarah Whatley. Delegate Helena Blaker commented on the productive nature of the day and the political nature of the discussion. Her group explored "how far the mechanism of the screen can become a social/political catalyst for the re-envisioning of the position of the body in society". Other groups reflected on what kind of liveness is brought about by screen performance and how mediation complicates notions of fiction and reality, documentation, authenticity and stillness within the moving image.

After a communal dinner the day concluded with a screening, which had been curated by Prof Liz Aggiss (School of Arts and Media, University of Brighton) and Claudia Kappenberg. The screening began with a series of shorts by artists from the South East; Catherine Long, Lizzie Sykes and Becky Edmunds, in which the actual physical processes of filming and framing determine the choreography, thereby challenging traditional hierarchies of filmmaking and choreographing. The shorts were followed by French Choreographer Jérôme Bel’s epic Veronique Doisneau, a work made in 2004 during a residency at the Paris Opera. Much of Bel’s oeuvre inverts hierarchies within theatrical traditions and in this work a single ballerina from a traditional corps de ballet becomes the sole star of the show, dancing excerpts of her subsidiary roles against the absence of the company and its soloists.

The symposium was a sell-out event and attracted artists and researchers from across the UK, Europe and South America. Feedback was very positive from both speakers and audiences, commenting on the value of having expert practitioners and scholars from outside screendance and appreciating the speaker’s approach to movement on screen from different perspectives. Karen Wood thought that “the practice may need to realign its current thinking, in light of new technologies, to extend further to a larger audience.” Another delegate, David McCormick, filmmaker and Senior lecturer in Screendance at the University of Winchester, commented that through the International Journal of Screendance an articulation of its presence as an evolving art form has been achieved. The Journal was welcomed as a model of good practice of how writing can both reflect and generate a discourse that underpins the practice whilst furthering academic debate. Mariana Pimentel, one of the overseas delegates from Brazil and currently working in Lisbon, Portugal, talked enthusiastically about the Symposium and echoed a question that was raised during the Open Space discussion: “Is screendance an interdisciplinary practice, a hybrid practice or does it generate its own form and language?”

Mary Wycherley, a practitioner and lecturer in multi-disciplinary performance practice, somatics and screendance in Limerick, Ireland said that she appreciated “the weight of interest in and distinct relationship between Screendance and Video Art.” She also pointed out that delegates shared “interest in both the practical development and the theoretical frameworks involved in the process of making screen-based work” and she was “impressed by the representation of different countries” at the symposium which felt significant for the cross-fertilization in the dialogue.

The symposium is evidence of the fact that a wider, international community of researchers has begun to deepen the debates. Meanwhile the International Journal of Screendance constitutes the kind of dedicated, ongoing forum for dissemination which has hitherto been missing within the screendance community. The Journal will allow for both practitioners and scholars from different countries and continents to exchange ideas and research and to work towards a coherent body of knowledge.

Claudia Kappenberg is Principal Investigator, AHRC Screendance Network, and Senior lecturer in the School of Arts and Media at the University of Brighton. Sarah Whatley is Co-Investigator and Professor of Dance at Coventry University.