Play & Productivity by Daniël Ploeger, a Dutch performer and multimedia artist, is an installation performance that took place in Kunstwerkplaats KipVis, Vlissingen, Netherlands in July 2009. In line with the major motifs and techniques in Ploeger’s works, Play & Productivity is based on the exploration of two scenarios: the visual and auditory perception of moving sounding objects in context of their cultural connotations, and the condition of the human body in a multiply mediatised and technologised world by focussing on its interaction with technological devices. Besides, the performance touches on such issues as the disembodiment of the liberal humanist subject in a technologised culture; presence and awareness through hypermediacy; the embodied performer and its amplified corporeality in prosthesis; and the question of art as useless ‘work’. 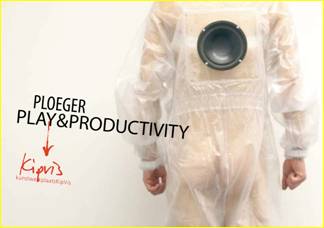 ‘The more I ventured into the visual, virtual world the more my non- virtual body called attention to itself like an anchor, like ballast. O seemed to be pulled between the two extremes of an imaginary spectrum: the abjection of flesh and the sanitization of technology.’ (Kozel, 1998: 83)

‘In the cultural bestiary, the body is pulverized and splayed apart, like a “lap dissolve”; a traveller in time where from the viewpoint of the advanced cybernetic technologies of the mediascape, the body is always a bid failure in desperate need of supplementary technical prosthetics.’ (Kroker, 1992: 33)

In Play & Productivity Ploeger proposes the space and his body as an experimental multimedial laboratory by using video documentation, live projection, TV monitors and a pvc overall equipped with biometric sensors and a loudspeaker. The performance installation is divided into two sections, synchronically taking place in two different rooms on separate floors. In the first room - the silent space of mediatised images - two TV monitors facing each other present pre-recorded videos of the artist’s and his cousin’s faces, while frequently interrupted live projections of a close-up of the artist’s body during the performance in the other room and pre-recorded close-ups of his cousin Nico working as a dustman are projected on different sides of the performance locus. The only sound source in the room apart from the spectators and the video projectors is the headphones situated in front of the live projection of the performer. 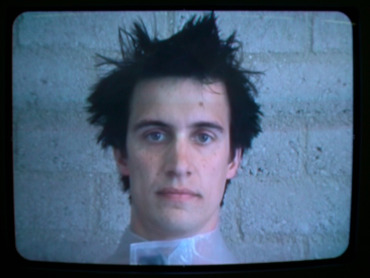 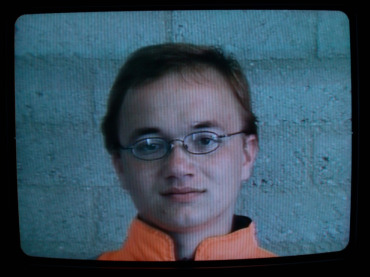 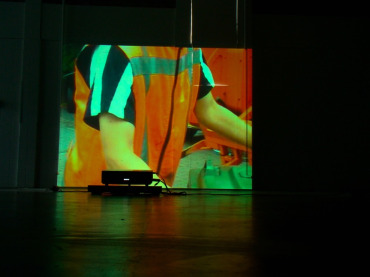 Different from the mediatised milieu, the second room, a used-to-be gymnastics place, accommodates the artist himself and the so-called live performance. Here, the cousin’s dustman suit, an objet trouvé, suspended from the ceiling, diagonally faces the dangled body of the performer in the pvc overall with the loudspeaker in the back. Throughout the performance, the performer pulls himself up on the rope, after which his body whirls and unwinds until he is forced to drop himself because of fatigue. This process is repeated until the end of the performance. As long as the performer’s body is in contact with the rope, the loudspeaker transmits sounds generated according to the blood rushing through the artist’s heart, measured by a Doppler device inside the overall. The timbre of the sound gradually alters throughout the performance in accordance with the rising air humidity inside the overall, which is measured by a humidity sensor. 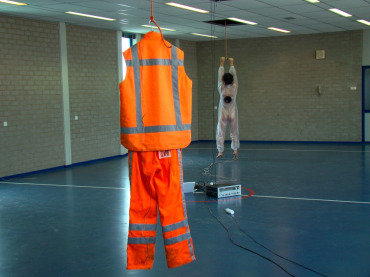 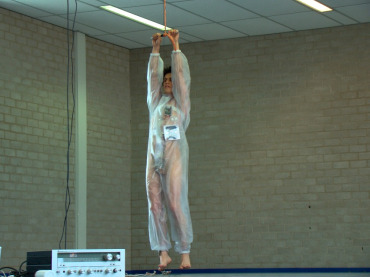 The sensory information is also transformed into visual data via the computer monitor in the midst of the space that demonstrates the humidity level inside the suit. Furthermore, as the performer’s body is in contact with the rope, the generated sound material, the live video transmission of the close-up of the performer’s body, and the generated sound are broadcasted in the other room. The performance comes to an end when the humidity sensor inside the overall registers a 100% level of air humidity, when the performer has to give up because of exhaustion, or when the technological devices break. 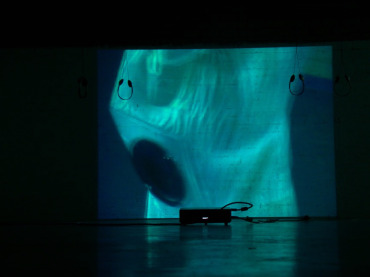 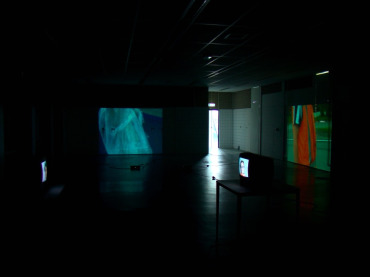 Ploeger’s performance installation is a heterogeneous collage synthesising ideas, notions, forms and styles. The richness in contexts presents a somewhat challenging and complicated kind of thinking form that provokes the viewer to dig into the piece. In this work, Ploeger works on the questions of the posthuman body and the perception of moving sounding objects by combining them with such concepts as presence, liveness, proximity and immediacy as well as autobiographical and sociological references.

Taking its cue from the notion of the posthuman arisen as a response to the disembodiment of the liberal humanist subject in view of the postmodern techno-culture and scientific advancements, Ploeger’s work questions the dialogic relationship between the visceral body and technology. In this respect, the performer draws on Gregory Bateson’s concept of a human body part as that which is ‘part of a single information flow and feedback structure’ (Dixon, 2007: 149). Furthermore, Ploeger’s performance installation associates with certain aspects of Stelarc’s Amplified Body, which seeks to enhance the body visually and acoustically, and extend its awareness of the world by re-examining the physiological control in relation to electronic modulation. (Stelarc, 1991) In Play & Productivity, Ploeger employs sound in amplified body as prosthesis, that is, the sound derives from the performer’s body. Therefore, the artist, who has control over his bodily activity, might accordingly manipulate and change the sound. However, the performer’s physical control of his bodily activities is certainly limited; that is, the continual hanging up on the rope causes exhaustion, which then proves absolute and intentional control over the body and the sound impossible.

The prosthesised body of the performer in its comparative relationship with the condition of his cousin’s body in the outside -‘real’- world operates in myriad layers: it is a trope for the exhaustion of the body in a hypertechnologised environment, it is a medium that explores the ways in which the human body interacts with technology, and it is a means of theorising and practising the notion of presence in accordance with the various theories emerged as a response to the goal of achieving immediacy in live performance. The interaction between the human body and its extension -the prosthesis- is consciously intensified and overtly revealed through the results. These outcomes indicate the remediation process which underline the interdependence and intermediality inherent in the encounter between the visceral and the technologised forms, and also re-direct attention to the commodification of the body under the influence of mass reproduction.

Another mainstay of Play and Productivity is the interaction among multimedia technologies, space, sound, movement and the perceiver. The spinning of the performer’s body, a moving sounding object, causes an alteration in the location of the sound in space, and accordingly conveys visual and auditive information in varying rhythms. Being perceived after its reflection on the walls of the room, the sound originating from the human body undergoes a change; that is, it becomes somewhat less proximate and direct to the spectators despite their physical closeness to the sound source. On the other hand, in the multiply mediated conditions of the other room, the viewer hears the sound through the headphones and observes the image via the video projection. One might argue that this is a highly mediated experience and thus distances the spectators from the actual image and sound. However, although there is no shared space in the conventional sense, the overt and multiplied use of technology facilitates heightened consciousness and responsiveness in the observer. Hence, the sound source becomes somewhat more ‘immediate’ and ‘proximate’.

To elaborate, challenging the rudimentary understanding of proximity as the essential prerequisite of immediacy and liveness, the performance underscores the idea that physical proximity, both visual and aural, does not necessarily engender liveness or immediacy. That is to say, in the live performance space the observer is actually in the same place with the performer and presumably has a ‘direct’ auditory and visual experience of the sounding object. However, one should here highlight the fact that the observer hears the sound after it is being reflected onto the walls, which accordingly alters the original sound. Moreover, the spectator is generally likely to stay at a distance from the performer who is semi-naked and in an uncanny position. On the other hand, the spectators in the other room observe the performance through the live video, which consists of a close-up of the performer’s torso, and they listen to the sound directly transmitted into their ears through the headphones, as opposed to the alteration the sound undergoes in the other room after being projected via the walls and air of the performance space. Contradicting the approach associating liveness and proximity with transparent immediacy, that is the repressing of the signs of mediation to create a sense of direct access to the object (Bolter and Grusin, 2000: 6), Ploeger’s performance generates a heightened sense of awareness by through hypermediacy, namely, the multiplication of the signs of mediation. (Bolter and Grusin, 2000: 33) Therefore, not only experiencing the performance more directly via multimedia devices, but also being openly surrounded by these media enhances the level of awareness of the audience.

Additionally, the two subjects of the performance, the cousin and the performer, are both absent to some extent: Nico, the cousin, is physically absent, the only traces of his presence are his work costume and his pre-recorded images in which merely part of his body is being displayed. On the other hand, Ploeger might be considered absent in the sense that his presence is somewhat made enigmatic owing to the extended and mediated body through a prosthesis, and due to the projection merely of his torso rather than a materially present body. This sort of absence or self-effacement of the performer in a way increases the degree of immediacy by enhancing consciousness about the mediatedness of the performance and of human existence in a technologised world.

From a different angle, Ploeger’s artistic output in Play & Productivity combines the artist’s autobiographical input with reflection on a wider context. As the title suggests, the performance installation is a ‘play’ on the contradicting perceptions and conceptions of art and ‘real’ work, and avoidance of physical comfort in relation to guilt concepts rooted in protestant cultures. The performer’s piece thus portrays a self-reflexive questioning of its form, its position and perception in the social sphere in comparison with the figure of the cousin, an embodiment of the productivity.

Leaving the performance space, one might wonder what Ploeger’s work means and what it is telling us. However, perhaps what matters is not primarily what his performance installation shows or says, but how it explores the ways in which information is (re)processed and (re)organised through a bricolage of mediation techniques, as well as the thought-provoking and engaging effect of this multi-layered work on the observers.

Seda Ilter is a DPhil candidate and Associate Tutor at University of Sussex, Brighton, UK. Her research investigates the ways in which contemporary theatre responds dramaturgically and scenographically to the prevailing mediatisation in theatre. She had her Bachelor and Masters degree in English Language and Literature. In addition to her research area, her interest lies in twentieth century and contemporary European and English-language theatre, critical theory, dramaturgy and media theory. She has published some conference papers on contemporary drama and theatre in conference proceedings.