This essay briefly outlines the often-reported failings of art theory and art-work that comes under the heading of ‘Institutional Critique’ (IC). It will describe the impossibility of their position and then suggest how only the art group, Cack-U-Like can offer a viable solution out of this Cul de Sac of Museumism.

Artistic practices that uncover the conditions of production, distribution or reception that operate in the art world (Fernandez O 2009) are summarised under the heading of IC. This critique of the institutions of art is often times divided into two phases: the first wave who sought a distance from the institution in their work (including artists such as Robert Smithson, Daniel Buren and Hans Hacke) and a second wave who addressed the inevitable involvement in the institution (including artists such as Andrea Fraser, Renee Green and Fred Wilson).

Further, IC is often accused of having been institutionalised itself. In fact it can only survive within the institution. Absurdly the futile escape attempt by art from itself is further encapsulated by pondering on the art institutionalisation of Duchamp’s ready mades. His aim of throwing the bottle-rack and the urinal into the art establishments face has merely opened the door for the artistic conceptualisation and commodification of everything. Moreover, to shape oneself through a critical relation to the museum as a legitimating institution, needs the museum to be just as big and bad as IC sometimes describes it. The delusion of the possibility of breaking free of the yoke of institution only leads to enslavement as- put simply- one is never more tied to a system than when one defines oneself in terms of being free from it. Thus a given artist’s belief in artistic freedom away from institutions fails to observe the extent to which they and their contrivances are the pure product of the mainstream art world (Wright S 2008)

Thus much of IC posits that institutional engagement is inevitable. However, contrary to this perspective, I would like at this point to suggest the work and ideas of the art group Cack-U-Like as a possible path out of this institutional maze.

Cack-U-Like’s attacks on the institutions of art operate outside the sanctioning of the institutions they critique. Starting in 2001, with Demonstration Against Toffs in Art- a cynical onslaught of the art world’s elite and its stifling grip on art. 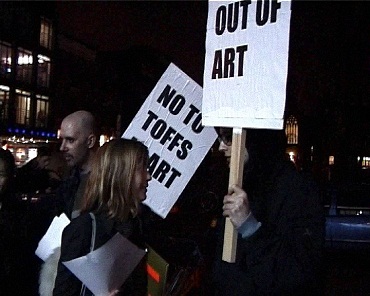 This performance involved Cack-U-Like waving placards at the epicentre of UK’s art-capitalism, the White Cube gallery. This throwing the gauntlet down to the institutions of art was extended by the performance Haunted Tate (2002)- which involved seven ghosts haunting the Tate’s Rothko room before finally being expelled by Tate security. This direct attack on the palaces of art’s deathly shadow also included 2005ad- where seven Neanderthals dragged a 3 metre high megalith into the Royal Academy of Art. And most recently with LET US IN where 2 Mummies unsuccessfully attempted to bring a 2 metre high pyramid into the Tate Britain. 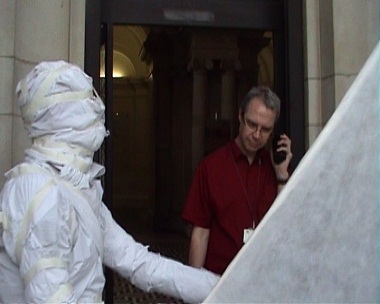 Thus in comparison with art defined as IC- such as Andrea Fraser and Hans Hacke - Cack-U-Like’s art operates outside of hypocritical, institutional sanctioning. Jon Purnell- a prominent member of Cack-U-Like expands on this, “the sanctioning and display of institutional critique informed art by the institutions it purports to critique is akin to criticising the Nazi party whilst goose stepping in Nuremberg”. Sadly, amongst a handful of poignant artists and art groups- including the well-intentioned group, Freee- it is only Cack-U-Like who have avoided this suffocating and destructive institutional acceptance. In a nut shell, it is only by literally standing outside of arts sanctioned edifices that any meaningful critique take place.

However, this castrated position is not without peril and leaves Cack-U-Like marooned and little known. Yet the anger they induce is sufficient evidence of the relevance and necessity of maintaining their position. In a desperate attempt to defend the hypocrisy of artists such as Hans Hacke and Gustav Metzer, the art critic Martine Rouleau writes that, ‘although these artists work is now recognized and respected by art institutions all over the world, they have actively maintained their marginal position.’ She further attempts to dismiss Cack-U-Like’s scepticism of institutional acceptance as ‘a rather hopeless view’ (Martine Rouleau 2008). Rouleau seems to be inferring that the said maligned institutions could eventually integrate critique and then adapt to it. However, as is constantly proven in the numerous shows and symposiums dedicated to IC, dissenting voices are only ever heard momentarily before being snuffed out through museumization.

In conclusion- it is only by artists and art groups adopting Cack-U-Like’s impervious institutional avoidance that any meaningful progress can be made towards addressing Adorno’s- often quoted phrase ‘museums are the family sepulchres of works of art’ (Adorno 1967:175).

Fernandez O The 'institutionalisation of curatorship'? The relationship between curatorial practice and institutional critique http://www.rca.ac.uk/Default.aspx?ContentID=502520&CategoryID=36647 (accessed 13-12-09)

Fraser A in Welchman, J C 2006 Institutional Critique and After JRP|Ringier

Graw I in Welchman, J C 2006 Institutional Critique and After JRP|Ringier

André Black is an art critic and writer and a regular contributor to Moth Art and Modern American Drawers.