“When I first met you, you could see me but I couldn’t see you…”, the invisible woman recounts.

When We Meet Again is a wearable film and one-to-one performance, a bizarre sensuous experience featuring you, your invisible friend, a 3D soundtrack, an old forgotten dance, an ocean, a flavour and me.

Video filmed from a first person perspective is played on video goggles, replacing your point of view by that one of a performer in the screen. When you are prompted to look down upon your body, what you see is… someone else’s. The brain is tricked into the illusion of being inside a new body and in a foreign space, through which you move and encounter mysterious invisible presences (aka, the live performer who interacts with you). The body-swapping illusion is enhanced by synchronized tactile and gustative stimuli throughout the live performance.

When We Meet Again is an outlandish voyage through meetings mediated by technology, blinded by vision, displaced by what you hear around you and you know it is not really there. The viewer is transported into a mixed reality between the ambiguous physicality of the screen, the ghostly realm of an invisible live performer, the virtual that feels real and vice-versa.

With its live approach to film-viewing, this piece is a reflection on how the mediation of audiovisual technology can shape human and social interactions and on the function (and de-function) of the body in our media inundated times. 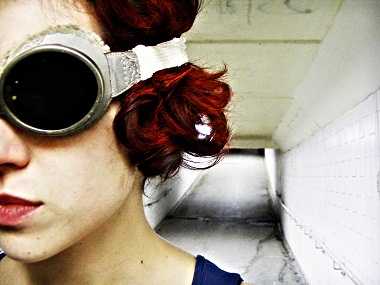 When We Meet Again promo image
Photo by Chloe Ducharne 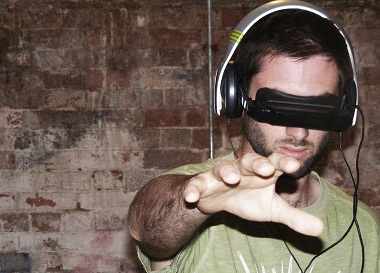 When We Meet Again viewer
Photo by Clara Garcia Fraile 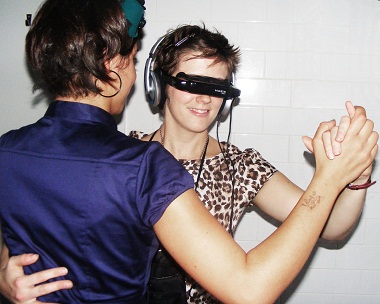 When We Meet Again dancing with participant
Photo by Sam Pearson

Me and the Machine is Clara García Fraile (Spain) and Sam Pearson (UK).

Through film, performance, text and interactive media, our work suggests imaginary and often bizarre situations in which the audience is invited to step in and play: play a role, play along, play an old forgotten song, play a game, 'play'.

We met while studying Performance and Visual Art at the University of Brighton, where we graduated in 2008. Since then, our work has been showcased in film, dance, visual and live art platforms, such as National Review of Live Art, Brighton Festival and In-Presentable (La Casa Encendida).

We currently live and work in Brighton (UK), where we are supported artists of The Basement.

Me and The Machine