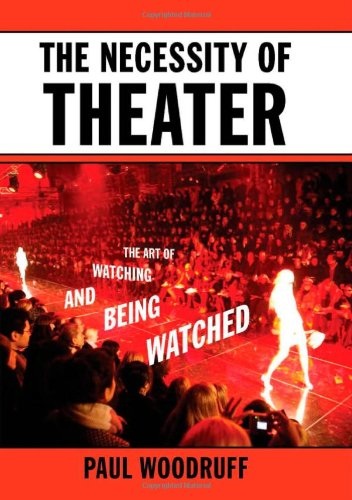 Paul Woodruff’s timely treatise on the necessity of theater arrives as a life buoy for an art that survives amidst a constant deluge of digital entertainment. Woodruff defines theater as a part of our human real life experience, and as a cultural act that transgresses the boundary between ordinary life and art. His text follows some of the themes outlined in Aristotle’s Poetics in its search for a connection between theater and ethics, by focusing on mimesis, tragedy, and empathy. Like Aristotle, Woodruff, a Philosophy professor at the University of Texas at Austin, also entrenches his argument in the philosophical realm, acknowledging in the Preface his intent to write a “kind of poetics” of his own. He sees himself as a lecturer who emulates ancient storytellers. In the classroom stage, he performs on a daily basis, sharing ideas and experiences, which students then criticize, weave, and develop into their own individual stories.

Through his narrative, Woodruff cleverly reels in his audience by bringing theater out of its sometime stagnant and elitist performance spaces, into the realm of daily life. He calls the reader’s attention to daily theatrical acts such as weddings, which must be witnessed to be valid, to children who clamor to be heard, and to instances of real life drama intruding on a stage performance. Woodruff’s introduction hints at his argument to come, focusing on how theater-like performances such as football games build a strong sense of community, while not being theater in the traditional sense. Woodruff struggles at length to define theater exploring what it is and what it is not. He states that theater must present situations worth watching and characters worth caring about, without falling into the trap of a value judgment. When Woodruff defines theater as the ‘art of making human action worth watching,’ he acknowledges that his definition is ‘loaded’ (68). The need to define human action, and moreover human action worth staging implies choice; a choice made by the playwright, and by the characters on stage. Thus tragedies, even when they move towards a predestined fate employ a movement that results from choices made along the journey. Theater can, and should, be cathartic for a society, particularly one that has undergone trauma. There has been a rise in recent years in drama trauma with plays dealing with refugee situations, genocide, and rape as an instrument of war. Theatre becomes a tool for communal acknowledgement of trauma, as well as a way to move beyond the event and into daily survival routines.

Woodruff mentions the need for an audience, for a live audience to create a unique theatrical event. Certainly in the case of weddings, an often-repeated example in his book, witnesses to the live event experience an original performance, whereas people who sit for repeated viewings of the DVD version find themselves distanced from the event. They are in fact mediated and manipulated by the editor who may or may not have been part of the primary audience. Woodruff argues that an audience cannot be removed from the performance because the participants bring empathy, and theater both feeds into and feeds on this audience response.

This duality is mirrored in the structure of the book, divided in two parts, as stated in the subtitle: The Art of Being Watched and The Art of Watching. In the first part, Woodruff explores various types of theater. He argues that theater must have an audience to be considered theater, and that the audience has to find that their time investment was valued. Here, his narrative becomes sometimes mired in explanations of what theater is not, and an earnest, though not often substantiated, defense of the need for theater within a society’s larger need for art. As an example, he explores how an elementary school version of Hamlet is just as valid, as theater, as a highbrow London stage production. He defines theater, as opposed to other forms of spectacle like football, as an event where the hero faces a conflict and there is a resolution. Yet, his defense focuses on the comparisons between performances, rather than in what would have been a more interesting, and topical, argument asking the purpose the staging of both Hamlets has for the community at large. Why in fact is it necessary to stage Hamlet?

This section of the book has an enlightening chapter on mimesis where Woodruff explores the ethical questions of theater, and where real life examples of performance events work effectively to support his theories. Woodruff points out that a selective account of a traumatic event, in fact a re-creation of the event, ‘could be more powerful emotionally than an eyewitness experience of the same event’ (Woodruff, 2008: 132). He explores the mimetic quality of performance to provide an audience with communal empathy for the recreated traumatic events on stage. ‘Mimesis calls up emotions and other feelings in an audience, and these resemble what we would feel if we actually experienced the events that are staged. Real events are the originals, and actions on stage are the doubles’ (Woodruff, 2008: 137).

In Part Two: The Art of Watching, Woodruff moves to the other side of the stage, becoming part of the audience and linking the success of the theater experience to various levels of emotional empathy. For an audience, caring becomes a minefield. It involves experiencing pain through memory triggers of similar situations. Here he uses Hamlet’s Hecuba speech by the First Player and the staging of The Murder of Gonzago quite effectively to demonstrate instances of virtual empathy. He then explores the problem that arises when an audience may be emotionally engaged, but not actively engaged. The audience cannot change what happens on stage, of course, but for Woodruff, a good play must make them feel like they could. He brings examples from Brecht’s Mother Courage, where the protagonist is an unlikable character, and yet the audience can still leave the theater feeling that change was possible.

Woodruff continues to use real-life spectacle examples such as the various reactions of witnesses to a bigamous wedding. There is a congruence of emotions in this situation between the brides and the groom, and the audience members playing out fantasies, or remembering their own weddings. The danger of congruent emotions though, is that it detracts the audience from the action and becomes ‘bad watching’ (Woodruff, 2008: 180). Woodruff encourages spectators to watch wisely that is to say to take in the spectacle as a whole absorbing the good with the bad. A wise watcher must remember who he is – with all his flaws – and who he is not, that is to say the fictional character on stage. He must be able to see both sides of the conflict. As Woodruff argues: ‘The performer must learn to watch, and the watcher must learn to perform’ (Woodruff, 2008: 229)

Woodruff’s text is a welcome addition to the ongoing live versus. digital performance debate. Although the text is easily accessible, the narrative voice tends to be uneven. It fluctuates from passages that read like lectures to earnest repetitions of an argument, to a colloquial tone that was sometimes jarring with the general tone. The momentum of his narrative sometimes came to a halt with his lengthy descriptions of performances that were not theater. I would have liked to see more examples of plays that justified the necessity of theater, rather than spectacles that did not further his cause.

Woodruff’s work does succeed, however in finding a place for theater beyond its historical entrenchment in the cultural sphere. He analyzes theater as a changing, dynamic social product proving that theater is indeed necessary for human evolution.

Lourdes Arciniega is pursuing a PhD at the University of Calgary. Her research foregrounds the staging of science in contemporary drama by women playwrights. She has presented papers at national and international conferences, most recently co-convening a seminar titled Women, Science and Performance at the Canadian Association for Theatre Research’s annual conference.