Since 1965, as the nation’s foremost Asian American theatre group, East West Players (EWP) has been instrumental in both presenting works by Asian American artists and providing opportunities for actors of Asian descent to perform onstage. In the past, whenever EWP has presented a non-Asian/American piece, they have inevitably interjected race and ethnicity into the piece, and their production of the Tony Award winning play Art by Yasmina Reza and translated by Christopher Hampton is no exception. Through the casting in the production by EWP, race, ethnicity, and class issues are interposed in the piece which provides a layer of depth and analysis and add a critical dimension to Reza’s play, while instilling further meaning into it and engendering a meditation on the possibilities of cross-racial casting.

Among the more than fifty Asian-American theatre companies across the country, East West Players was one of the progenitors and has had the most staying power. Founded in 1965 as a response in the aftermath of the Watts Riots during a period of great social unrest in Los Angeles, the founders of EWP wanted to form a company that spoke to social justice and equality and also had the desire to expand the discussion surrounding race relations from a strictly black/white framework. Of the nine founders, some of the more prominent pioneers who acted as trailblazers and make inroads for all Asian Americans in the industry are James Hong, Soon-Tek Oh, and Mako. During the period surrounding its inception, many Asian-American actors were dissatisfied with the roles they were available in Hollywood and they had the desire to play leading roles and characters that were three-dimensional, and EWP provided the opportunity to perform in these roles. Initially, EWP produced mainly Western classics and did not include any Asian-American works until the 1970s when Mako, who won a Tony for Pacific Overtures and an Academy Award for The Sand Pebbles and served as the artistic director of EWP for their first twenty seven years, began to concentrate on producing pieces by writers working on the Asian-American experience.

Presently, EWP has four mainstage productions, approximately forty to fifty readings of plays with Asian-American themes with about three to four of these works being workshopped. The company still strives to keep their program racially and culturally diverse, and race continues to add another layer to a particular work where it may not have initially been at issue. For instance, their production of The Tempest (2002) effectively “Asianized” a postcolonial reading of the text itself. A common interpretation of Shakespeare’s play is viewed through a postcolonial lens that illuminates the act of discovery as an intrusive, violent act of domination. Within this analysis, Prospero is seen as the colonizer and imperialist figure who rules over the indigenous peoples of the island while Caliban is perceived as the postcolonial figure who inhabits the island as the Other and is represented as being sub-human, animalesque, and grotesque. The EWP production put an Asian face on both colonizer and colonized through their embodiment and re-interpretation of the piece. An Asian-American as Prospero upsets the racial hierarchy and an Asian-American Caliban turns the Other into an Asian-American Other and the Other becomes specific and particular. With their production, the racial debate expanded beyond a simple black/white dyad.

Also, in the play Equus, the character of Alan suffers from a repressed, devout Christian upbringing and constructs his own theology where horses are tantamount to deities and he fails to differentiate between worship and sexuality. In the end, he blinds several horses with a hoof pick after engaging in sexual activity in a stable, and they are blinded for “seeing” his sexual act. Alan wants them to be blind to his indiscretion, and, symbolically, he wants to remain invisible to the power structure and wants it to be blind to his activity. His act of blinding the horses is borne out of the horror of his actions and the desire for his “gods” to not “see” or acknowledge his act and sexual frustration. In the EWP production in 2006, Alan’s sexual frustration transmogrifies into a concomitant racial and ethnic frustration over the Asian-American experience and its accompanying racism, oppression, and prejudice through the Asian American bodies onstage embodying the roles. In their production, blindness is also symbolic of a desire for color-blindness by the power structure, so it becomes a desire for blindness to otherness as opposed to just sexuality solely.

Yasmina Reza’s play Art premiered in Paris at the Comédie des Champs-Élysées in 1994 and has been translated and performed in several languages. It has won the Moliere Award and a Tony for best play and the Laurence Olivier Award for the London production in 1998. The play is divided into scenes, which consist of both dialogue and monologues directed at the audience. While the value of art in society is a continuing debate that transcends time, it is now during the current period of economic recession when its value, or lack thereof, becomes even more apparent as funding from the government is reduced as well as patronage from individuals. The value of art and its place in society during this economic downturn is what makes the EWP production both timely and relevant.

The play is a comedy about the disintegration of the friendship between three longtime friends after one of them purchases an expensive work of art. The simple, monosyllabic title reflects the minimalism of modern art which is at the center of the piece. Reza’s play is a humorous look at the value of art and the many questions surrounding what constitutes “art.” The three characters in the piece, Marc, Serge, and Yvan, are all art lovers and casual critics who exist and thrive in pretentious lifestyles surrounding the elitist art world. Marc and Serge are the dominant members of the triumvirate and their relationship is at the center of the play, while Yvan is more of a comic foil with humorous idiosyncrasies, such as his obsessive-compulsive behavior concerning various objects in the play. Marc has served as a mentor to Serge and feels betrayed and hurt by the fact that Serge has shown some independence and forward thinking about art without Marc’s mentorship. 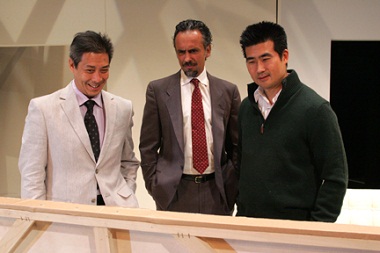 Alan E. Muraoka’s set design is sparse and minimalist, which is reflective of the painting in question and of modern art in general. The setting is entirely white, including the leather sofa, armchairs, and even a spiral staircase that leads nowhere. Overall, the set creates and exudes a sterile, museum-like atmosphere where art may be appreciated from afar, but never tampered with. The color white and “whiteness” are significant motifs in the piece, with “whiteness” typifying the power structure entrenched in the exclusive art world and in society in general. The painting at the crux of the play is essentially a blank canvas, and is described in the piece as “white-on-white.” The painting itself is not a “real” painting, but one created for the play and it is not intended to reference any specific piece or artist. The cross-racial casting in the production contrasts with the stark white painting as it stands as a looming white monolith that is representative of the power structure and its subdivision of the elite art world. 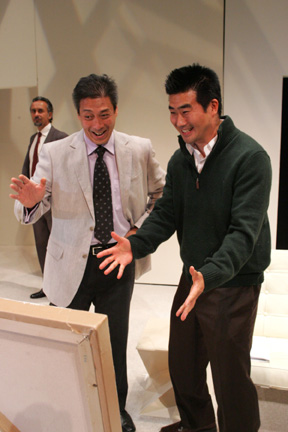 The painting serves as a catalyst in the play for drawing out unresolved issues and deep-seated emotions within the characters concerning their relationships to each other as the escalating argument over the painting leads to a downward spiral that becomes personal. For instance, near the end of the play, Serge reveals that he despises Marc’s wife, Paula, because of her passive-aggressive method of waving away cigarette smoke. Marc later states that he feels Serge abandoned him for a more elite crowd of art connoisseurs and replaced him with both the painting and a higher class of friends to achieve a more elevated social status. The major conflict in the play surrounds Serge’s relationship with Marc, which culminates in a rather superficial argument that leads to a physical altercation between the two men. During the comedic fight, Yvan intervenes to quell the melee, but only as an interested observer who has no real stake in the argument. 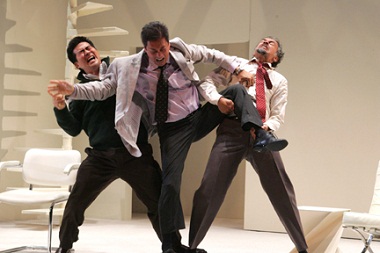 The character of Marc signifies elitist, class-afforded “whiteness” and the privilege associated with it. He is an aeronautical engineer who has acted as a mentor to Serge over the years and questions Serge’s procurement of the painting. Marc is portrayed as an elitist and an art snob who is the dominant figure in his friendship with Yvan. However, as played by Bernard White, who is of south Asian descent and clearly not Caucasian, Marc reads as a minority onstage and as a consequence represents an Asian’s attempt to break through the glass ceiling into “whiteness.” Along with Marc, Serge is representative of the exclusive, “white” world of high art. Serge is a dermatologist who purchases the painting at the heart of the play for 200,000 francs, initiating the fallout between the friends. As played by Francois Chau, however, a Cambodian-American actor, Serge reads as Asian and exhibits the desire to be a part of “whiteness” and to pass as white and enjoy its privileges. 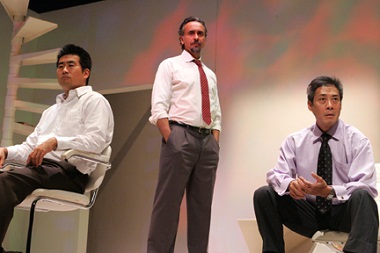 The character of Yvan does little to subvert Orientalist notions of Asian/Americans as passive and submissive. Played with aplomb by Ryun Yu, who is of Korean descent, Yvan is a neurotic, anal-retentive stationary salesman who is obsessed with objects, including a pen cap that he is unable to find. He is weak-willed and becomes a passive observer to the argument between Serge and Marc at the end of the piece. While Yvan does go on tirades concerning preparations for his upcoming wedding, they are simply empty, idle threats and complaints and he never truly asserts himself. As a stationary salesman, Yvan also belongs to a lower class than both Serge and Marc, which further abjects Yvan in the play and deems him as an outsider in the trio of friends.

At the end of the play, Marc desecrates the painting with a marker by first forcefully slashing a diagonal line across the painting and then drawing a downhill skier above the line. But, in the end both he and Serge wash away his drawing with soap and water, symbolically restoring cultural hegemony, the superficial world of high art, and “whiteness.” Ostensibly, the play is about “art,” but it gradually and unwittingly devolves into a commentary about race, ethnicity, and class as a result of the EWP production. Reza’s piece is intended to be a critique of the shallow and artificial art world, but any real critique of the art world is ultimately elided as the play devolves into a superficial farce. In David C. Nichol’s review in the LA Times writes, “Reza is undeniably an adept stylist, but she fails to make her conveniently proportioned characters, their heady talk or what they inflict on each other add up to true dramatic action, let alone substance,” and also states that her play “remains an ornate sketch masquerading as a masterpiece.” While the play itself is ultimately devoid of any real substance,the EWP production is significant as it both discourses on the value of art in this economic downturn and introduces race and ethnicity as a dimension, and it becomes a critique of the cultural hegemony and elitism inherent in the art world.

Julian Cha received his PhD from UCLA in Theatre and Performance Studies. His dissertation is entitled "Cross-ethnic Traffic: Performing Ethnicity in Asian/America." His research interests include Asian/American theatre and performance, popular culture, performance studies, and postcolonialism.

This article has not been peer reviewed.