The descriptor ‘digital’ is now commonplace in recent book titles and conference sub headings that enthusiastically explore the potentials of remediated technology and the social frontier of the internet. The Future Everything Festival and Conference in Manchester, from 12th – 15th May 2010, formally known as the Futuresonic Festival, showcased and investigated aspects of new media and urban futures through music, art and conference. Despite being deemed a festival and conference to discuss and examine the ‘future’ – it is undoubtedly exploring a future that is ‘digital’ shaped. Most predominantly, the festival’s organisers focus upon examples of how digital technology can creatively benefit our daily lives with utopian enthusiasm. The first Future Everything Award this year for technological innovation was deservedly granted to the Eyewriter project. The Eyewriter is a developing research group that enables graffiti writers with degenerative neuromuscular diseases to continue to practice their spraying through a digital tracking device that allows them to draw with their eyes.

The visual arts programme of the festival was co-curated by Dr Karen Gaskill, and festival Director Dr Drew Hemment. They collaborated with the newly opened Manchester FabLab at Manchester’s Manufacturing Institute to set up a challenge for artists to create an artwork within eight hours using their equipment powered by digital software and processes. The FabLab; the first of its kind in the United Kingdom, is one of 35 international laboratories that were born out of Massachusetts Institute of Technology, with the first FabLab opening in an urban area of Boston in 2005. The publicly funded laboratory aims to offer engineering and prototyping equipment to all aspects of the community, so that they can make, ‘almost anything’ as their slogan promises. The workshop provides free open access every Friday and Saturday and is funded by a range of investors and agencies in collaboration with the Manchester Manufacturing Institute. This impressive list includes North West Personal Development Agency, Manchester City Council, New Economy, Investing in England’s North West, NESTA and Manchester: Knowledge Capital. The facilities available to bodies such as schools, community enterprises and businesses as well as individuals include a digitally controlled laser cutter, vinyl cutters, large milling machine and precision milling machine to make micron resolution three dimensional moulds and surface-mounted circuit boards, electronics assembly and digital embroidery equipment. 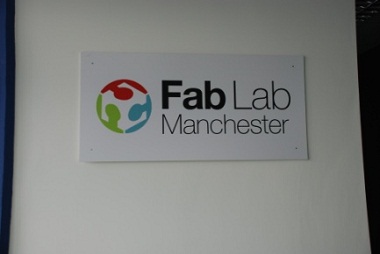 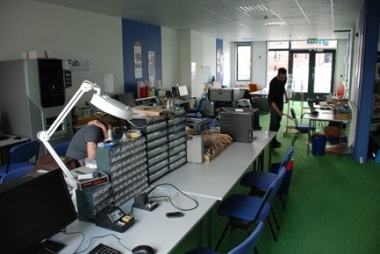 The FabLab Challenge, in conjunction with FutureEverything, tested eighteen artists in a manner not dissimilar to the current television reality programmes such as the X Factor and more appropriately the recent series School of Saatchi (BBC2, 2009). This short project - which spanned the length of the FutureEverything conference and festival - challenged eighteen artists to produce an artwork within an eight hour period using the facilities at the laboratory without significant training. Participants ranged in experience from students to established artists and designers. Most came with a limited understanding of the engineering equipment, although all had a strong understanding of software design packages such as Blender and Inkscape. At the end of their eight hour session, with support from technical support at the FabLab, they were required to have an exhibition ready artwork to be exhibited at the closing event of FutureEverything Festival at The Palace Hotel, Manchester on the 15th May 2010. On completion, a winner would be judged, and the small prize of a sculpture created on the FabLab milling machine would be awarded for the artist of designer that most successfully interpreted the given theme using the digitally powered engineering equipment.

The theme for the project Urban Intervention in a Digital World was revealed to the artist’s at the beginning of their eight hour slot. The artist’s responded to the challenge in a number of ways - which in some cases reflected their current concerns in their work. As Hayden Insley, FabLab Manager observed, each artist took a different approach to the project – with some reflecting for hours on the theme before putting any ideas into practice and some responding decisively and experimenting with possible processes. Undoubtedly, all artists felt pressurised by the time constraints, and the majority of work was not ‘finished’ within the eight hour slot.

Richard Hooper, an Associate Professor in Fine Art and Design at Liverpool Hope University, had recently been working on organic forms in his practice; using numerically controlled milling machines to generate three dimensional models exploring the relationship between the organic vessel and landscape. Hooper’s clear focus for the project, previous to being revealed the theme, was to utilise the FabLab’s Stereolithography Rapid Prototyping equipment which his own institution did not hold in order to develop his own ongoing research within his practice. Hooper produced a small three dimensional form using the stereolithgraphic prototyping system which was displayed within the exhibition upon an imitation of grass and a small man. Hooper’s size of production was limited during the project due to the very slow process of producing three dimensional forms in this manner. 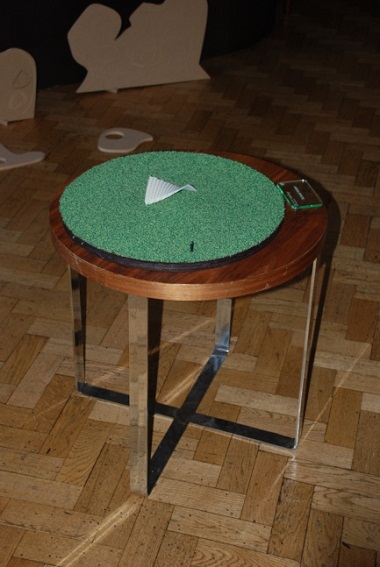 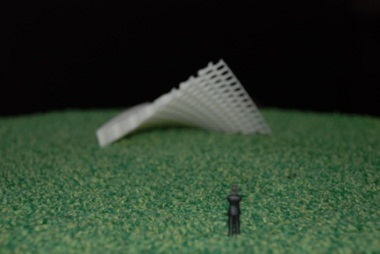 Other artist’s such as Nicola Smith (www.nsartist.co.uk) also adapted the projects facilities to further her own enquiries within her practice. However, she was relatively disinterested in the intricacies of engineering process. Smith, who is currently in her second year on the part time Masters in Fine Art at Liverpool John Moore’s University, normally works in performance and interactive events. She chose to construct a large scale form using the milling equipment that she would employ within a performative work, Giddyup I. Cutting a large shaped ‘I’ which she coated with yellow vinyl, she transported the structure from the FabLab in Ancoats to the Palace Hotel in central Manchester and documented interaction and reactions she encountered through a short film. 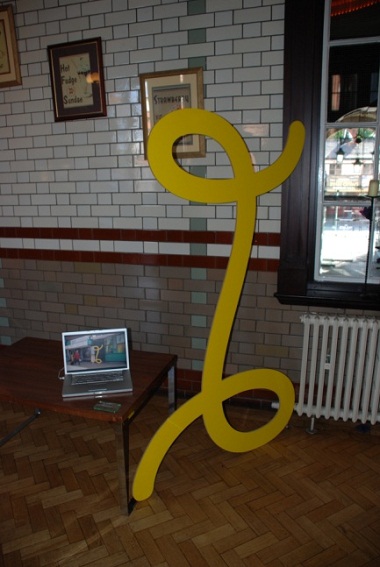 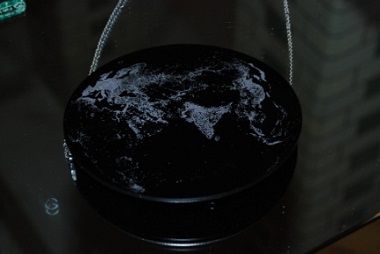 Other finished works included a small scale sculpture visualising Nigh View by Ainara Elgoibar using the laser cutter and etcher. Elgoibar (www.ainaraelgoibar.com) is currently on ERAMUS exchange at Manchester Metropolitan University upon the BA (Interactive Arts) from the University of Barcelona, and normally works in sound and electronics. Within the project, she was nervous to tackle an electronic output within a short time frame and opted for a visual interpretation of a NASA imagery of lighting at night upon a Perspex sheet. The only electronic work was made by Brian Degger, created a small mechanised motor, but similarly felt frustrated by the time constraints of the project to be able to fully achieve what he had visualised in response to the brief. Another output from the project was a substantial water wheel from the Owl Project (Steve Symons, Tony Hall, Simon Blackmore) which was cut using the large scale milling machine and built manually. The collaborative group whom often create wooden instruments that explore and question our relationship with user interfaces, additionally felt restricted by the short time frame, and inability to be able to reflect on their making to realise fully for exhibition. 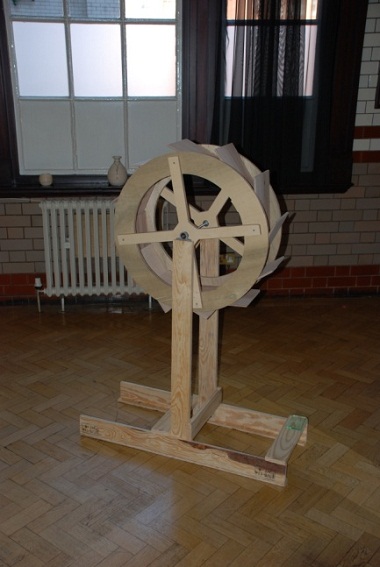 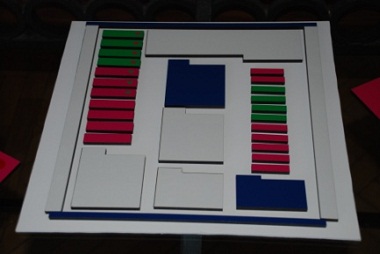 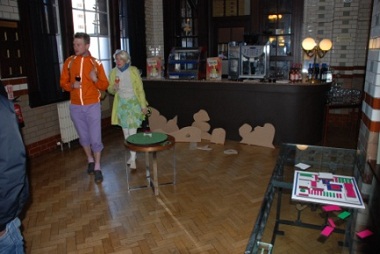 As an artist also participating in the project, I was attracted to a particular piece of equipment before the theme was revealed. I had previously worked with vinyl lettering and hoped to utilise the vinyl cutter. In my own work, I drew from forms within the FabLab website to create movable blocks using the laser and vinyl cutter that could be rearranged in a more flexible manner than within the digital interface to create a building facade, that however had no actual function.

Each artist exhibited a work within the Post Room within the Palace Hotel, Manchester with some artists working right up to the beginning of the opening; which was attended by the last of the participants and organisers of the festival. The curators and staff at FabLab chose, however, not to award a prize as they felt that there was no clear ‘winner’ within the endeavour. For the newly opened FabLab, the manager Hayden Insley considered the project was additionally about testing and stretching their own team, ‘to build their strengths and see what they would be able to do’ in relation to future projects. As a staff team, they had already proclaimed on opening night that 8 hours, was ‘just too short’ and in forthcoming years if they ran the challenge they would extend the time, amongst other alterations. Similar to the nature of making and creative practice, ‘time’ for reflection is one of the key factors for progression and realisation. The feeling of frustration by artists and designers was outweighed by a sense of achievement and gratitude for being able to develop their initial ideas using such outstanding digital facilities and support that would be very expensive elsewhere - if not funded by the array of sponsors for both the FutureEverything Festival and Manchester FabLab.