Authors connected to Trans-Media-Akademie Hellerau present their thoughts of virtual and almost global (world) communication in their collections of essays „The World as Virtual Environment“ published on the occasion of the CYNETart_07encounter festival.

Authors with a background in media art, stage direction, electronic sound-composition, journalism, cultural studies and films who are associated with the Trans-Media-Akademie Hellerau (TMA) and especially this years telematic CYNETart event, participate in the discussion about the topicality of interactive telematic presence in performance, mobile graphics, games, audio-visual composition and de-central communication – in brief: "Tele-Plateaus". The publication "The world as virtual environment“ is designed by Thomas Dumke, Johannes Birringer and Klaus Nicolai in the style of the previous publication of 2005 »Global Medialisation and Integral Culture«.

The book has been released at the same time as the opening of this year’s computer-aided art event CYNETart_07encounter. It deals with the very own interest of TMA: promotion of the telematic media art within human dimensions and perceptions in the sense of interactive - which means a network of - computer-aided “sound-vision-spaces”.

Thinking about and experimenting about telematics and its application in arts with computer- and internet-based possibilities may not be new. The essays however provide an update to the discussion by its specific and practical focus. The texts are written in German and English, which requires a multilingual biography (fortunately Japanese and Slovenian are not among the languages).It is a user-friendly read because of its structuring into four sections and an attachment. Further reading is suggested by respective literature references. Many pictures provide a pleasant design and overall informal approach.

Heide Lazarus is a cultural scientist and theatre scholar with interests in dance, interactive environments and history. She also works as a dramatic advisor, assistant director and physiotherapist. Hiede is the editor of the CD-ROM The document Wigman/The Wigman file and the scientific assistant in the DFG project "Systemic bodies?" at the University for Music and Theatre Leipzig.

Book Abstract and Content Summary: The World as Virtual Environment

Through cybernetic ‘machines’ and networks, the world experiences virtualisation in a way so far unprecedented. This makes the difference between the existing and the possible as well as between reality and simulation, as encountered in our everyday perception, barely detectable. In the miscellany at hand authors from various professions and backgrounds approach the globally expanding cybernetic ‘spheres of the possible’ and illuminate risks as well as opportunities, particularly in communication and action via networked virtual spaces.

The driving question behind it all is how and whether the telematic ‘revolution’ taking place at the moment will lead to a radical cultural change. This book is addressed to artists, engineers, pedagogues, philosophers, politicians and sociologists and, above all, to those who practically deal with new media technology on a day-to-day basis. 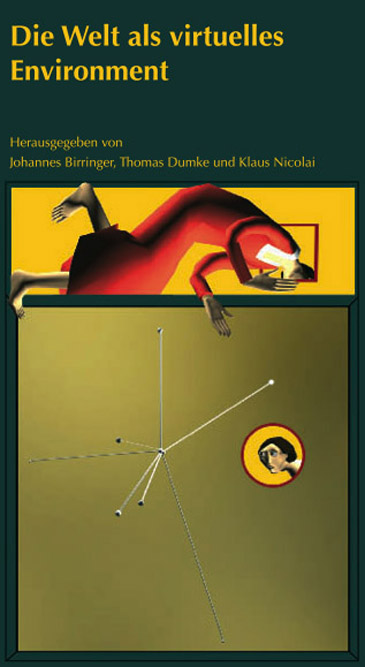