A juggler and a cello player. She improvises while he juggles with four white balls. Simple, straightforward. But not quite. They are both performing behind a black gauze suspended in front of the audience. After a while a virtual white ball bounces across the stage (across the gauze screen of-course). To be followed by hundreds more. It is a stunning effect, as they swirl around in patterned clusters.

But what happens next is even better. Adrien Mondot starts to juggle with the six virtual balls, performing virtuoso (and physically impossible) routines which are nevertheless completely believeable.

This is a very clever use of software application and projection - all designed by Adrien himself.

As if to restore the human balance, at the end of the piece he comes through the gauze cyc and performs a short physical juggling routine with consummate skill and charm.

The show has been a tremendous box-office hit. Convergence 1.0 performed at the London International Mime Festival in January 06, at Avignon Theatre Festival in July 06 and is currently on tour internationally. 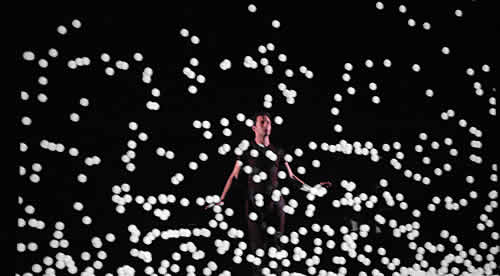