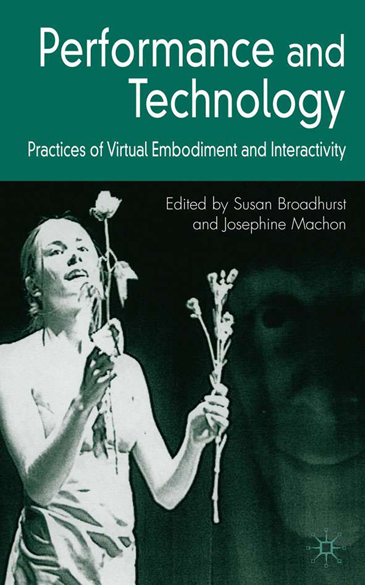 Susan Broadhurst and Josephine Machon’s Performance and Technology is a timely and informative survey of digital performance practices. It consists of 14 essays, the editors’ introduction and an afterword by Philip Auslander. The essay writers are a range of international artists mostly using their own work and research processes as case studies. They include Susan Melrose, Carol Brown, Sarah Rubidge, Petra Kuppers, Christie Carson and Gretchen Schiller. The digital and corporeal are central themes but the writers address a diversity of technologies being employed by artists including motion capture, dance on film, digital sound, digital film combined with live performance, artificial intelligence, interactive technologies and biotechnology.

The consistent and reader-friendly editing of the book (each short essay is broken up into sections and a conclusion with notes and references) makes this a palatable and thought-provoking survey for the general reader. The book is illustrated with 20 black and white illustrations. Some writers are more successful than others in giving us word descriptions of the art pieces they are discussing. There is good signposting to further sources of information beyond the book on the practices being described, but at times the discussions would have benefited from stronger visual representation.

Robert Wechsler argues that ‘audiences are tiring of digital effects and the interactive performing scene is in somewhat of a crisis’. He discusses the danger of ‘boys with toys mentality’ and the possibility that the ‘means overtake the end in importance’(61; 69). These have been criticisms levelled at art and technology for some time. It is a relief to recognise, reading this book, that the debate has moved on past the William Gibson influenced (but not inspired) cyber rhetoric of the 1990s and past Stelarc’s contention that the body was obsolete and would be replaced by technologies (1995).

Technology is often discussed as if it is something new – referring to contemporary digital, nuclear, robotic and bio technologies – but technology is of course as old as human beings. Humans have been employing technologies since we used our first flints, stones, hemp ropes, wooden poles, wheels. Waves of technological development have occurred – electricity, radio, air flight, photography, spectacles, telescopes, surgical methodologies, video, space travel, applications of nuclear physics. Marcel Mauss remarked that the body is our first technology and our most natural instrument (1934). Francisco Varela has described the body as a portable laboratory (1999). All other technologies reference and extend the body and in turn the body incorporates the instruments we invent to enhance our encounter with our world.

The experience of the corporeal schema is not fixed or delimited but extendable to the various tools and technologies that may be embodied. Our bodies are always open to and intertwined with the world… instead of abandoning or subjugating the physical body, instrumentation and technology extends it by altering and recreating its embodied experience (Broadhurst: 148-49).

In the 1960s Nam June Paik and Charlotte Moorman literally wore 16 inch TVs strapped onto their bodies, preceding the miniaturised, wearable technologies we now use in our increasingly mobile and networked lives. Vito Acconci and Bruce Naumann used the newly invented video camera as mirrors for explorations of the self, provoking Rosalind Krauss to write about an aesthetics of narcissism (1976) – a discourse which could still be applied to ‘new technologies’ now.

Writing about dance on film in this collection of essays, John Cook asks a question that could apply to all the different types of technology in art discussed: which is most important in the use of digital technology in art – the effects that are unrealisable in simple live stage performance (manipulating, enhancing, altering viewpoint, site and real time through camera angles, locations, speeding up, slowing down and repeating), or the understanding and somatic reaction provoked in the audience by digital image that is different to that achieved by live performance (41). Several writers comment on the differing impacts of differing mediums. Carol Brown argues that ‘vision is our most objectifying and distancing sense’ (94). Other writers in the book discuss the perceived illusion of theatre and veracity of film, the representation of interiority in film and of exteriority in performance.

Mark Coniglio makes an distinction between materials driven work and content driven work (81). Cook also unfavourably contrasts the formalist aesthetics of Merce Cunningham’s Biped with choreographers who are reintroducing narrative, expressive, political, social material (33). But Coniglio’s argument that there is a clear distinction between material-driven work and content-driven work, that the first can be dismissed as modernist or that there is a clear progression (and therefore hierarchy of value) from the first to the second, is not convincing. Art can address human issues both explicitly (content) and implicitly (aesthetics).

Virtuality and interactivity are the technological foci here but they are not new or exclusively belonging to the digital as several authors in the book explain. Steve Dixon points out that Antonin Artaud coined the term virtual reality in the 1930s but with something different in mind (29). Wechsler reminds us that interaction is essentially conversation, dialogue, participation, community: ‘we must think of interaction primarily as a psychological phenomenon, rather than a technical one’ (63). Johannes Birringer refers to the evolution of interactive technologies and ‘the embarrassment of interactivity’ (47).

Virtuality and interactivity raise issues of the nature of reality and the relationship of the individual to communities and to human collectivity. Talk of new digital communities and participation may be the new cyber rhetoric. In and of itself such assertion is not enough. We have to ask what is the quality of interaction or community enabled through digital technologies?

Undoubtedly ‘we are moving in more dimensions than previously. Our habitat is technological and geographical; we live in a digital infrastructure as much as a physical one’ (Brown: 95). But where are we going with our information overload? How are the younger generation navigating the digital with real life?

Several writers point out that ‘indifference to the distinction between real and fictional is central to the digital episteme’ (Auslander: 196). In a situation of increasingly blurred lines between fantasy and fact, reality and simulation issues of responsibility and morality arise. Values and behaviours that may be acceptable in the digital realm may not be workable in the ‘real’ realm but may leak across that thinning membrane.

The internet is still quite a naïve environment with expectations of trust in it that are long since gone from ‘real’ urban life. But the people populating this world are as likely to be predatory, exploitative, deceitful as in the real world. Fraud is burgeoning.

If everything becoming a game and everyone is a player, an erosion of valuing the rights of others when they are reduced to distant, separated, images may occur. What is humane between human beings is often only evoked by real presence and can be reduced by visual representation. Digital interaction is interaction between mediated images rather than indexical, present, embodied consciousnesses. There is no difference between a graphic avatar and a screen avatar with a human original.

Some of the essays advance an argument for the increasing merging of the corporeal and virtual concomitant bodies. And yet there is no equivalence. With some exceptions, virtual experience on the whole remains specular, solitary or at least separated and screen-based. It has a tendency therefore to the pornographic, onanistic, objectifying, commodifying. Oron Catts and Ionat Zurr refer to K.D. Thornton’s cataloguing of the use of life in popular culture into four categories of objects, performers, victims, co-creators (157).

Catts and Zurr’s work with the Semi-Live and the Partially Live addresses a ‘growing discrepancy between our cultural perceptions of life and what we know about life scientifically and what we can do with life technologically’. Their work explores the uncanny territory between the living and the dead.

There is a fine line between exploitative fantasy objectifying others and the responsible, imaginative play of art but merely cyber scaremongering would be no better than cyber rhetoric. An engagement with digital technology is one of the key influences that has brought embodied consciousness and a metaphysics of the body back into focus to augment the postmodern emphasis on identity politics, diversity, the constructed nature of reality and power structures. Rubidge’s essay effectively describes non-verbal modes of knowing.

pre-reflective bodily responses constitutes a form of consciousness and a mode of knowing which are as valuable as the kinds of knowledge which are generated by a reflective consciousness mediated by words or other symbols (113).

She discusses Henri Bergson’s and Gilles Deleuze’s discussions of reality as not static, homogenous and spatial but instead heterogeneous, temporal and nomadic (117). Brown’s essay addresses ‘how and why we move, spawning new identities’ (94).

A backlash against the postmodern and conceptual orthodoxies of the 20th century is now accumulating from several directions – through a critique of what has been left out of those frames – a metaphysics of the body, a unity of aesthetics and ethics, a reimagining of the social arising from international dialogues and shifting global politics. Dixon remarks that ‘postmodern and deconstructive debates … have recently lost momentum, returning many artists and commentators to more traditional hermeneutic perspectives and philosophical enquiries’ (19) and Barry Edwards comments, ‘I left what I felt was becoming a postmodern mainstream within performance to take a radically different direction towards creative process’ (Edwards & Jarlett:129).

An emerging strategy for moving towards a new post postmodern paradigm in artists’ work and in critical writing has been a reengagement with and updating of some of the elements of humanism and romanticism (see for example Texte zur Kunst, March 2007). Edwards and Ben Jarlett write that their practice is ‘driven by the search for human content, human interest, the human story’ (140). Melrose writes, ‘my sympathies and political engagement remain humanist’(10). Auslander points out that most of the essays are

decidedly humanistic … in emphasis, reassuring us that technology cannot take the place of human presence… that it is best used to extend the capabilities of human performers, to express humanistic themes more fully, and to … evoke responses from realms of human physical and psychological experience (197).

In their introduction Broadhurst and Machon argue for a new aesthetics incorporating the emotive, intuitive, ludic and sensate (xvi). This call to an more expansive understanding of being human than allowed by the 20th century postmodern and conceptual paradigm is echoed in the work of philosophers such as Elaine Scarry (1985;2000) and Giorgio Agamben (2005) or in writing on the philosophy of consciousness by Antonio Damasio (2000), Varela (1999) and Max Velmans (2000), for examples. In this new paradigm a ‘new body of humanity’ (Agamben cited in Brown: 96) is emerging through a new dialogue with the digital, but still carrying the old – and true - moral issues.

Damasio, Antonio (2000) The Feeling of What Happens. London: Vintage.

Scarry, Elaine (1985) The Body in Pain: The Making and Unmaking of the World. Oxford: Oxford University Press.

Scarry, Elaine (2000) On Beauty and Being Just. London: Duckworth.

Tracey Warr is an independent writer and curator based in Devon. She is the Editor of The Artist’s Body (Phaidon, 2000) and has published writings on a wide range of artists including London Fieldworks, James Turrell, Marina Abramovic, Joan Jonas, Heather Ackroyd & Dan Harvey. Her publications this year include essays in Panic Attack!: Art in the Punk Years (London: Barbican) and Ten Years of OMSK (London: OMSK) and a film interview with Marcus Coates for The Dawn Chorus (Bristol: Picture This DVD Publication Series).