"Transfers" by Matt Roberts, Assistant Professor of Art and Program Director of Digital Arts at Stetson University, an interactive car ride of abstract visualization and John Cage-like musical performance, creates individualized portraits of a city.  Sitting in the back seat facing an LCD screen with speakers, the rider/reader, controls the direction of the driver and thus the sights and sounds of the art presentation. Matt Roberts sits next to a laptop and a tangle of wires connecting a camera under the rear-view mirror, taking in the scene in front of the car, the microphones on the truck outside, and a GPS unit to the laptop and its software program.  As the driver, Roberts, relegates the position of creator to the passengers in the seats, he emphasizes how moving through the urban environment directly creates the experience which is delivered to the riders as a video on CD after their ride. The project calls upon the viewer to direct the driver; “where do I go now?” The directions run through a program that modifies the experience of the passenger. The urban landscape, designed to accommodate automobiles, undergoes a detournment, it becomes like art and life--constantly shifting.  Each time the art is created it is unique; the project almost thrives on the unexpected. Getting lost becomes the destination. In a very modernist way, the process is more important than the end result. However, it calls into question the satisfaction of an interactive art piece and the necessity of the material object.  Combining high technology with the ubiquity of automobile travel, Matt Roberts’ mobile project moves the audience literally through its own city reinterpreted, reformatted, and reconfigured. The paper will include a video of the visual experience that I saw and heard in Orlando, Florida and several images showing the setup, visualizations, and the artist.

The sun is setting slowly behind a mirage of fashion shops, computer stores, and cinemas as I sit in the parking lot of the Altamonte Mall trying to decide where to go. Not where to go in a functional sense; I have nothing to pick up, drop off, or purchase. Rather, I am being asked by the driver of the car I am in where I want to go so we can simply drive around and see things—in-car wandering. The experience is the reason I am here, to interact with Matt Roberts’ mobile art presentation “Transfers.” Described by Roberts as “a project exploring real-time generation of art and user participation in a mobile environment,” Transfers is taking car culture to a new level (Transfers).

I am seated in the back seat of an art project. LCD screens are mounted in front of me. Microphones are attached to the trunk outside, feeding the speakers the electric din of street life. A camera is mounted underneath the rearview mirror, facing the urban sprawl of concrete and flashy shops. Next to the driver/creator Matt Roberts is a laptop receiving information from a GPS. The laptop has custom-built software that translates all this input into a visual and auditory show for the passenger in the backseat.

“Let’s just drive around,” I say, knowing artistic consequences are at stake and hesitating about the level of control offered to me as a passenger. The rules of this interaction are unclear; I do not know the equivalent reactions for each possible decision made. As an artist myself, I want the knowledge of each choice I am making—to know the round thick mark of paint is made by a round camel hair brush by applying specific pressure. I give myself over to the chance aspect of this creation. The passenger must accept that thought s/he makes the decisions; there is no chart in the car that details the direction or the effect. 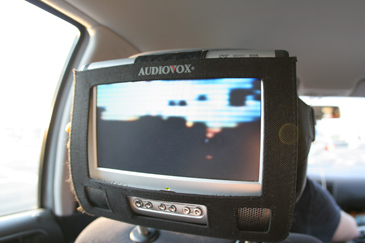 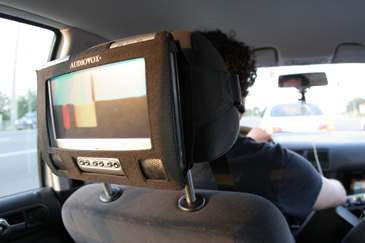 On the screen before me, I watch red lava erupt up and fall back into a pixilated landscape. I take in the abstract colors slathered on the monitor like Gerhard Richter paintings. Roberts explains the workings of the project, including small unnoticed details; the software has a memory to recall visual input from the camera of places that have already passed and intermix it with current camera input. The sounds coming from the speakers are a blend of car engines, motorcycles, people, chimes, and wind. It sounds like the ocean breathing over a Wal-Mart soundtrack. The GPS calculates the latitude and longitude of our path; when these change more than five degrees a specific chime sound is made.

“In Florida, you drive a car all the time,” Matt Roberts explains; he wanted to find a way to make it more interesting. Being in a car seems to have become a ubiquitous symbol for postmodern culture across the world. Roberts has attempted to make the symbol of culture into a unique creative production of aesthetics and realism. The unexpected plays an important role in making this interaction distinctive. “As the user tells the driver where to go the passenger becomes both performer and viewer as they experience a unique piece of art generated by their decisions,” the “Transfers” website states. This stress on chance, as well as the creation of art by merging daily life with entertainment technology, can be classified as the art of redirection. All parts of “Transfers” (even the directions) become redirected into something else, something unexpected. The art of redirection is crucial to the movement of the Situationists, who found the act of tuning things around important to revealing new truths. The Situationists International created and executed experiments, by way of aesthetic intervention into contemporary culture, with the goal of erasing the false barriers between art and life (Drifting). Roberts’ “Transfers” adopts a similar strategy and goal to bring art into the urban everyday. The seemingly straightforward event of riding in a car and watching a video is enriched and complicated by the Situationist’s concepts of aesthetics and redirection. Even Roberts’ use of the car, a popular symbol of American life since the 1950’s car culture boom, relates to one of Guy Debord’s main criticisms of modern culture. “Today urbanism’s main problem is ensuring the smooth circulation of a rapidly increasing quantity of motor vehicles. We might be justified in thinking that a future urbanism will also apply itself to no less utilitarian projects that will give the greatest consideration to psychogeographical possibilities” (Introduction). Is this future urbanism an aesthetic ride with no destination?

One of the main dialectical tools of the Situationists is detournment—the effect of taking something culturally banal and making it oppositional, through the use of art--a “turning around.” Detournment opposes recuperation, commodification, and the repossession of that which dulls us into inaction. “Transfers” uses this tool to dissolve boundaries between inside and outside space, private and public, and most importantly, art and life. Many of these artificial divisions are stuck in place by the idea of the tacky spectacle. “In the spectacle, the lower the use value of modern survival-time, the more highly it is exalted. The reality of time has been replaced by the advertisement of time” Guy Debord stated (Spectacle). Driving a car is one of the most obscene use of advertised luxuries, because every American citizen believes it to be a natural right—an accepted marker in the passage from child to adult—a partition of private and public space—a reason to rearrange city planning and urban centers.

Mobile art, in general, attempts to bring aspects of the spectacle into the mundane and to make routine acts into art. Space is another form of the spectacle—the lived environment of urbanism—that is evident in the dichotomy between “inside the car” and “outside the car.” The Situationists International made an effort to expose the spectacle that stultifies us by creating small ruptures within nonspectacular things. These ruptures make art out of life and reveal the possibilities of everyday life. Matt Roberts’ project seems to be working in this same direction. However, he may not yet fully grasp the potential for de-materializing art, since he gives a CD to each rider after his or her experience. Does the participant need a CD that has a video of the visualizations and sounds on it? Is it disembodied art with no reference to the actual event? I feel that the CD as an object of documentation is unnecessary and almost hypocritical to the whole purpose of the project. When in “Transfers,” I became aware of the intensity of the now-ness—no other person could be experiencing this, nor will anyone ever again. Even viewing the CD, one misses out on the important aspects of interacting with the driver, seeing the views outside, feeling the car move, or being able to change the art mid-turn. Each city that “Transfers” is presented in creates a very specific portrait of that place/space, as well as the rider/writer who directs the path of the car. The physical object of the CD disconnects the art from that specificity and makes it material and universal.

“Transfers” weaves the riders back into their own cities, linking their choices with the art of their environments. Moving the audience into the art, taking the art out of the gallery, and making a project that relies on experience, not presentation, all seem to effectively function in Roberts’ piece. In an urban world designed for automobile transportation, it is encouraging to see a project that emphasizes having no direction—simply wandering. There is a potential for beauty in the turning movement of detournment. “I don’t have in mind plastic beauty--the new beauty can only be beauty of situation—but simply the particularly moving presentation, in both cases, of a sum of possibilities” Debord stated (Introduction). By surrendering a destination, “Transfers” makes getting there the best part.

Kristin Powers, a Florida native, currently lives and works in Orlando. She graduated summer 2005 with a Bachelor degree in Fine Arts; Painting and a second major in English Literature from the University of Florida. After graduation, she moved to Orlando to begin her graduate work at University of Central Florida; focusing on the physical materiality of books and the visual aesthetics of their making. Her interest is in the body as a form. She writes poetry, paints, creates digital collages, and also bakes to get out her abundant creative energy. She is producing work for her Masters in Fine Arts degree in Digital and Interactive Media. The goal is to be a college professor that blends the visual and language arts together in a class. Her award winning art has been in many juried shows across Georgia and Florida, and she is in the University of Florida art collection