Various whites inhabit Grace Surman's solo work; the white sheet of a cartoon ghost disallowed an apple due to the serve lack of a mouth hole, the snow white of flour blown into shallow drifts, the white ears of a magician's rabbit pulled from what here is not so much a hat but a system of restraining logics akin to those an escapologist must master and break, the minimalist and ubiquitous white of an IPod, the white of white bread on the turn to browned toast and the white of white tape used to bind Surman's body in a more visceral evocation of the escapologist's act.

The piece, at turns as unsettling as it is comic, works to essay the function of the magician's assistant, a role traditionally filled by partly dressed young women variously employed to offer props to their employer as glamorously as they can, stand as still as they can, hide as best they can, or simply appear as lovely as they can in a bid to distract us from whatever's being palmed, swapped or vanished in front of our very eyes. Alone before us Surman gamely performs the role of a magician's assistant but to the aide of no magician and no tricks. Instead we witness a series of fragile attempts at creating near-tricks, or part-ticks, that falter, fail and disintegrate. What appears to have disappeared here is the act itself.

The piece is littered with a defiant series of presentations, where Surman desperately trying to maintain the traditional false smile of the magician's assistant, offers to us by why of an out stretched arm a number of objects and actions that must now pass for tonight's entertainment. These offerings, at times creating the intended unease of us not knowing how to except such gifts also work to shift us into the position of Surman's absent magician. Surman's out stretched arm offers us an apple as if we might be apple to turn green fruit into something more precious, less mundane, something that might give purpose to its presentation. Here the pretence of magic, its allusions and constructions, are given over to threateningly real enquiries around self display and self presentation; a presentation which shifts between a knowingly 'cute' bunny-eared girl and an equally self-aware performance maker working firmly in a tradition that for Surman exists to be plundered, revered, and ridiculed in equal measure. As another half-trick or near-escape fails and Surman desperately chases a runaway rubber ball as it rebounds chaotically through the room, throwing Surman into an equally chaotic choreography - one which miracously includes catching an air-born slice of ejecting toast - the earlier conjured presence of Pina Bausch is replaced and reframed by the other dexterous toast-catcher, Eric Morecombe.

As the piece unfolds we realise a series of physical and conceptual restrictions shape and constrict Surman's movement through the work. These restrictions set by the performer herself seem to be in place to trap the performer herself and work to push Surman into the constant act of trying to escape her own decisions, perhaps even her own presence as the work's performer. Physical restrictions are created only to be evaded, or side-stepped in an a series of near or potential escapes that begin to resonate with Surman's own sense of performance; Surman has previously spoken regarding her previous performance and video works, about a practice which creates a strenuous environment needed to be overcome by great physical and mental stamina and although fascinated and pulled towards this practice she feel's ill at ease with the potential violence and seriousness of its proposal. So what we witness here in Surman's beguiling, beautiful and at times moving new work is evidence of a need to escape, to slip in and out of logics, of traditions and of modes of selfhood, modes which move between the seemingly honest and the playfully constructed. And between the two, the suggestion appears to be, we might glimpse Surman's own vanishing act. 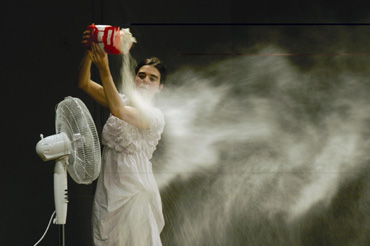 The image is of 'Liverpool White' at Bluecoat Arts Centre, photographer Alexandra Wolkewicz.

Grace Surman's practice follows a delicate but systematic exploration of how one might live, think and act in the world, through an attempt to understand presence in the live theatrical event. Since 1994, Surman has shown nationally and internationally, solo and collaborative work in performance, installation and video. Past work has been commissioned by and seen at ICA, CCA Glasgow, National Review of Live Art, British Dance Edition, Tramway, Chisenhale Dance, Hull Time Based Arts and Bluecoat Arts Gallery. Based in Glasgow for the past six years, she teaches performance on the Contemporary Theatre Practice programme at the Royal Scottish Academy of Music and Drama. Her new body of work, Slow Thinking is supported byTramway, SAC and a Breathing Space Commision from Arnolfini.