There can be little question that digital technology holds out as yet undreamed of opportunities for dance, and especially for contemporary dance. It is not, for example, like film, which did so much for drama and comparatively little for dance. Film transformed drama because of the way the technology was exploited. Once narrative film took firm hold and a cinema industry began emerging, dance on screen was generally forced into musicals. The exception to this was the narrative about dancers' lives, of which The Red Shoes (1948) was not only the first but the best of the genre, which includes such egregious works as White Nights (1985) or The Turning Point (1977) as a means of justifying the inclusion of long sequences of excellent dancing, mostly ballet. Contemporary dance, even after the arrival of television, has had to make do with theatre dances transformed into television events, or short inserts of the style Channel 4 and the Arts Council have been keen to commission since the mid nineties.

Since then something astonishing has come over the media industries. The first is the lowering of the costs of production to unprecedented levels. With a G4 PowerBook, a copy of FinalCut Pro and a three chip camera, anyone can access broadcast quality equipment for their ideas. And with the advent of the Internet, broadband capable of sending video streams and free sites like YouTube or IFilm offering hosting facilities, an enormous international audience can be reached without the mediation of television producers or funding councils. Within this empowerment of the masses with the tools of the media comes a third component: the destruction of narrative as a precondition of acceptability. The disintegration of story from visual style has triumphed, and destroyed the format narrative tended to support. So, gone are the regulation two/five/fifteen minute slots. The work can be what length it requires itself to be. Gone also are the creative restraints, of the need to cater for a mainstream audience who are always assumed to know virtually nothing at all about dance, and hence need something invariably described as accessible or educational to watch during the little gaps in Christmas programming. The new production and distribution chain accommodates those who want to deal in niche interests, determining a visual framework that meets an international audience whose consolidated global numbers dwarf domestic alternatives.

Given this transforming economic and social technology, the challenge to dance artists working with digital media comes from other directions. There is no doubt that visual artists working with body themes understood very quickly the potential of new media in expressing something significant about physicality. Sam Taylor-Wood or Bill Viola were exploiting the opportunities of new technology from the mid-nineties, long before dance people had access to the technology, or interest in it as a means of creating work. These artists, and many others like them, moved the moving image of the body into the art gallery. This was a significant departure that acquired the right sort of audience for work characterised by simplicity and sophistication, a feature often lacking from contemporary dance of the time, preoccupied as it was with addressing subjects rather than a public.

The eventual response from the Arts Council was the development of the Capture project in 2001, an effort to capitalise on the opportunities for dance in new moving image practice. This scheme has regularly centred on collaboration between choreographers and filmmakers, a neat division of labour that could please two constituencies and encourage some exchange of visual ideas. Paul Bush's Pas de deux de deux (2001) is probably the best example of this, where an interesting filmic technique is applied to the instantiation phenomenon, producing a film of wit, simplicity and intrigue. It actually explains something significant to the viewer without condescending to them, and remains centrally dependent on the dancing to make a statement. Many of the other commissions have, historically, given up on the dancers altogether. By recruiting the idea that everyone can dance, and that every movement the body makes is dancing, works like Human Radio (Pennell, 2001) or Ten Men Dancing (Rowe, 2003), duck the issue about what dancing is at all by replacing it with the mundane, or substituting it for obscurantism that elides the body as an issue in dance. The emphasis on post-skill imagery in physical representation appears to express a lack of confidence in knowing what to do or be as a dancer, and how to exploit the technology for a dance purpose. Most of the Capture works look like experimental art student films, often without the wit, and thus come across as ponderous blundering into the world of creative technology.

The potential for this technology to bring a new audience to dance has been widely understood as moving the work from the theatre to the art gallery. To be fair, dancers have been doing such a thing for some time with live performances, often on the unforgiving concrete surfaces of the nations' public galleries. Live performances in an art gallery environment are often a charming novelty, but rarely provide much more in the way of deeper understanding of the dancing, or of the art around which they are dancing. New media work is different, in that the dance components are using the same kinds of presentation formats and means of production as visual artists. With this comes some very specific advantages which bring with them some dangers. The most obvious is that the work is dealt with at the same level as equivalent work in the visual arts. The art gallery patron does not consciously distinguish between dance work and art work. The location, presentation and content suppress the distinction, and the work stands in relation to the tradition of the visual arts rather than dance. This reality requires some careful thinking, because whilst theatregoers understand the difference between drama and dance in the theatre, however blurred this has become in some productions, there is a conscious choice made in the appreciation of the work. What seems to be a good idea often irritates the regular gallery attendee, whose threshold of interest is not the same as either the audience member or the television viewer.

The best recent example of this misunderstanding is the current exhibition Doppëlganger (Aggiss & Cowie, 2006), touring the UK as part of the Capture 4 series. Installed at the New Art Gallery Walsall, it looks handsome enough at first glance. A large gallery space with four (or rather eight) stereoscopic projections of prodigious height, impressive screen resolutions for depth of colour and the quirky necessity of donning 3D glasses for the full effect promise a great deal. But the impact quickly wears off, replaced by a feeling of frustration and embarrassment that such an opportunity should be so wasted. Each of the images is short film, stylised by dropping frames out to give a stop-motion animated effect. A gallery scene, an exterior, a restaurant and a bathroom are the individual locations chosen from the NAGW's impressive building. In what appears an all-too-conscious currying of favour with the commissioning body, this is a cultural product placement that most visual artists would attempt to suppress by finding the unidentifiable or underused. As a love letter to the Gallery's splendid architecture, they work better, with the shot composition emphasising the elegant straight lines of the panelling and the shininess of the sinks, but this is at odds with the content of each of the scenes, with the possible exception of the restaurant scene (though, as local wags will point out, this was closed on financial grounds some time ago). 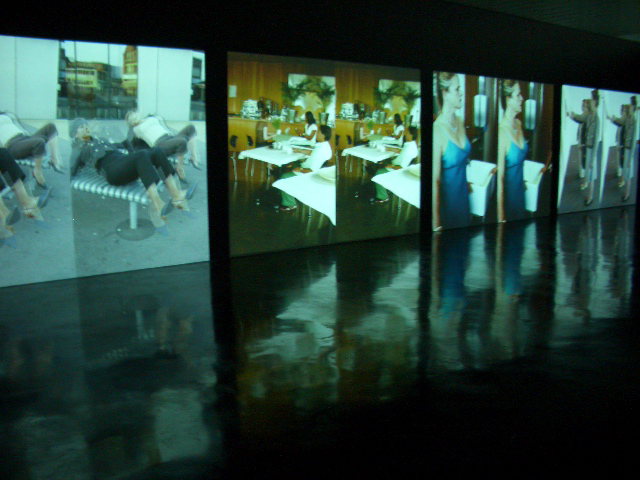 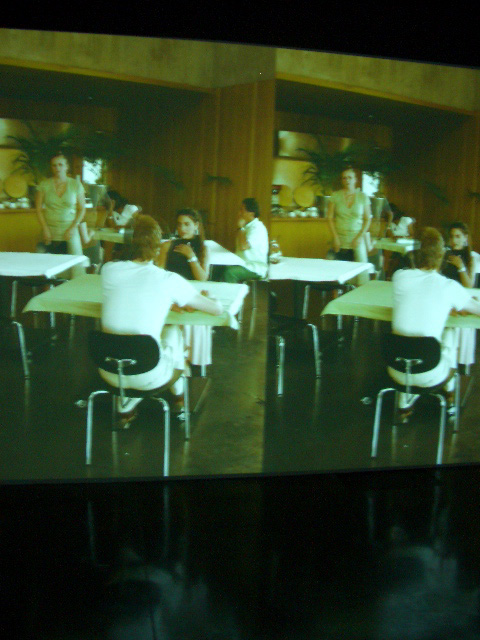 The characters in each of the short films stare at each other quite a lot, none more so than Liz Aggiss, whose cabaret-style performance makes her look like no more than a paranoid bag lady. This simply doesn't work on film, and the resulting alienation isn't just between the characters, but from the viewer as well. The brooding, nervous staring at others as if they are guilty of some social transgression doesn't match the visual temperature of the locations, which are far warmer than the makers appear to imagine. Art galleries, and especially the one chosen here, aren't the dark alienating pits of the theatre, but light, airy social spaces. No one expects to have a private experience in a gallery. The fairly minimal movement repertoire reminds one of the choreography of the early nineties, where dancers on stage would perform the private, personal movements of everyday life imbued with the qualities of their dance training to sustain interest. In this case, if the movement itself contained qualities, the device of frame-dropping kills off the continuity, so we are none the wiser. The movement range is so limited as to look a pretentious afterthought, an unnecessarily public manifestation, where tension between the characters puzzlingly develops into unison arm gestures. The best controlled component is the sound that accompanies the visual images: the sharpness and control of the internal sound for each diptych is the one feature where the technological advantage of the presentation is exploited. The stereoscopic effect of the glasses doesn't work particularly well, and is only given some depth to work with in the bathroom scene. The people viewing the work when I visited dispensed with them.

The problems for 'Doppëlganger' come about partly because of the necessity in a visual arts environment to think differently about the challenge in encountering a spectator there. This is not a difficulty that encumbers visual arts practitioners who know this environment well, and are trained to cope with it. They make punchy, arresting and challenging films, where the content demands attention, even if it appears to be minimal at first glance. It is not sufficient to believe the gallery contains a new audience for dance; it is also necessary to think about dance in a new way for that audience to be reached. The loyalty of a dance audience is not likely to sustain much practice in the gallery, whose patrons have far more choices, and whose understanding of what they are looking at is deeply critical. The novelty of dance in the gallery, tacitly admitted by the poorly curated contextual material available on the leather sofas in the next room, will quickly wear off without encouraging a generation of artists to use the technology more effectively. To begin imagining their work in technological terms requires new training and facilities, some of which are already coming on stream. As indicated above, the potential for this technology to deliver for dance what film did for drama is not insignificant. But make no mistake: this is a new form that will require a different approach if it is to capture this new space. 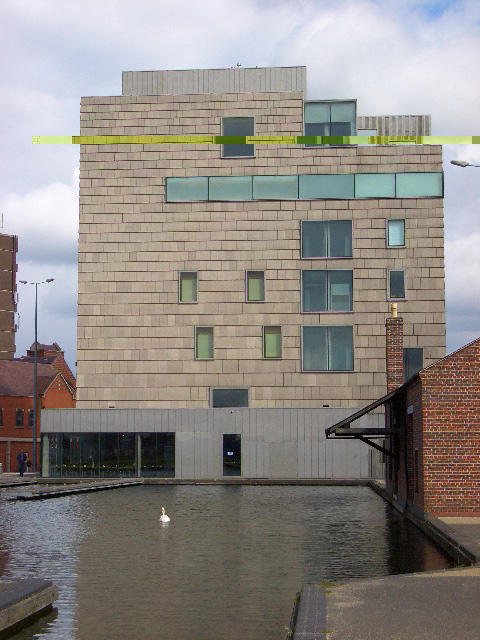 Dr. Gregory Sporton is Director of the Visualisation Research Unit in the Department of Art at the Birmingham Institute of Art & Design. He specialises in creating imagery from physical movement, and is currently developing a wearable sound system for dancers. His work includes publications on the cultural significance of dance, the nature of technique and the problems of theory in such a practical subject. Prior to his work at the VRU, he was Head of Research at Laban, where he developed its existing post-graduate programme. He is currently working on a book about dance in Russian culture.