Bones of the Skin was an impressive and critical examination of what little girls are made of. From the moment the viewer walked into the space, we too were forced to consider our own flesh, our own bodies and their functions on a physical, moral and theoretical level. The selection of works seemingly embraced and rejected ideas about physicality, sexuality and motherhood, representing bodily fluids, bodily functions, flows, shapes, colours, cycles and reproductions that we naturally (and culturally) recognise to be both repulsive and exquisite to the female.

Australian artists Kirsten Hudson (WA), Michelle Siciliano (WA), Jo Pursey (NSW) and Boo Chappell (VIC) each installed candy-pink-flesh coloured artworks that led the visitor through the length of the gallery. Their installations functioned like organs inside a body reminiscent of the heart, the skin, and many of the digestive organs.

Falter, 2004 by Hudson consisted of stills from a private performance to camera. The artist's naked body was shown frame-by-frame, getting coated in hot-pink sugar crystals. The artist looks away to her reflected image from a hand-held mirror. The stills were presented chronologically in small wall-mounted light boxes that the viewer could illuminate manually. On one hand the body was portrayed as being beautified through a ritualised process of adornment however as more of the narrative is revealed the sugar-coating process appears to attack, infect, colonise and corrupt her perfectly controlled body. The transgression is seemingly double-edged and the image of the artists' body turns from passive victim to self-indulgent host. In the final few stills, as she is becoming completely consumed by the sweet coating; the artist looks to the camera and smiles. By this final poised gesture, Hudson presents herself as the queen bee: nearly completely coated and caked in sugariness: gazing back at the viewer to gloat with accusation at the audience for her narcissistic becoming. 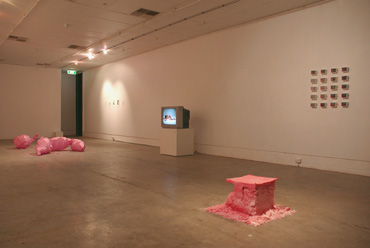 Hudson's latest piece Lump: a self portrait, 2005 was similarly delicious but harder to swallow. The artist had constructed a 64.7 kg 'lump' of pink sugar. The 'lump' itself was petite - it didn't even come up to my knee - and yet it the pretty little work commanded a monumental presence. The 'lump' was exactly the same body weight as the artist. It was a compressed, moulded and syrupy version of her physical and psychological self. Hudson had left evidence that the 'lump' was once a solid, perfectly moulded form that had been deliberately removed from its supporting structure to lay alone, exposed and decaying in the doorway of the gallery. The crystalline structure lay venerably on the concrete floor slowly crumbling, fading and oozing syrup from its corners. The poetics and aesthetics of this piece were stated with clarity and sophistication.

The game of hide-and-seek that women have with their own bodies was also the theme of Siciliano's installation titled a shadow of my former self, 2005. Siciliano created a series of delicate air cushions that were dressed in pink satin and hummed quietly. By virtue of association the title, the puffy shapes and white noise phenomena made me think of the objects vibrating gently like blobs of gelatinous tissue or fatty deposits. The lustre of the fabric referenced items of personal luxury and evoked curious dispersions about all sorts of possible acts associated with pampering and indulgence. Each puff cushion was made in the size of a small domestic pet and, like the sugar 'lump', the temptation to touch them was overwhelming.

Regardless of their lightweight exteriors, the little bodies in Siciliano's piece were heavily laden with darker metaphors and symbolism. The artist had literally marked a territory, or shadow line on the concrete floor with pink contact adhesive and the objects were deliberately placed beyond these designated boundaries. The implication of the bodies neither fitting in nor completely crossing the controlled confines of their marked spaces left little room for interrogation however the two candy-pink diminutive floor-based self-portraits by Hudson & Siciliano reverberated well together in the space to become a point of constant return and focus in the exhibition.

Chappell's Blow Me, 2005 consisted of a beautifully crafted digital metamorphosis of the body and its many facets to saturate the viewer with a colliding codex of bodily perspectives. On the wall beside was Pursey's dermatological wallpaper series Cheya II - psoriasis, 2004 that combined images of small floral bouquets fashioned in patterns next to large scale patches of skin disease that erupt randomly across the flat pink vinyl.

Each of these artists responded to a number of constraints and/or constructs of our modern existence through varying degrees of new media hybridity. The beautifully written catalogue explained theoretical undercurrents and justified the eclectic mix of practices on display. While it was interesting to walk around to marvel at the various choices and models that each artist had used - from plasma-screen moving image to soft motorised fabrics, vinyl, acrylic and gooey sugar sculptures - I was also aware that I was also being asked to consider the foundations for the particular conceptions of identity, biology, ethics and community that they represented.

What are the practical and material implications of the process of embodying feminist technologies of today? My own personal answer to this question recalled "fascination and horror, both desire and loathing" (Braidotti 1994, 128). By my own response I could begin to understand the collection of works as a solid conceptual and political project of the Curator. The exhibition, coordinated by Perth based artist and emerging Curator Lia McKnight, formed the Major Research Project of her Masters of Applied Cultural Heritage at Curtin University of Technology. McKnight chose artists whose works revealed varying degrees of surface tension and the underbellies of their 'private parts'. In doing so McKnight carefully alerts us to her own discussions on the architectures and materials of gender and (dis)embodiment. The promotional material explains the artists are "…giving us an insight into their own personal perspective of what it means to be inside their own skin." Regardless of any post human interests that McKnight inspired, the selected artists exhibited various personal and social incarnations, reverberations, reincarnations and manifestations of the flesh and it's potential to metamorphose beyond itself into the realm of the attracted/repulsed other. They used deliberate strategies to remove, shift and place various 'bits' inside out, becoming this and that and working between the centre and the margin of their own experiences.

It didn't matter if we didn't have any insight into their lives or practices for the sentiment of Susan Merrill Squire's Liminal Lives, (2004) began to hit home. No matter how much the body is beautified, crucified, proliferated and modified it is rather uniform as a point of conceptual and political difference, while more critically and paradoxically, it offers a locatable and abject spatial register on being human that we can all relate to. It is our human condition.

Bones of the Skin also explored a kind of beauty that considers the body's natural response of reflex and reflux to these issues. The exhibition also included Julie Rrap (NSW) and the only male artist Liam Benson (WA) who contributed photographic etchings of a modern woman in fetish garb. The artist poses himself in covert and partly overexposed frames. The finish was reminiscent of historical closet titillation cards that had been pre-loved and well used. This nostalgic museum quality was a little lost next to Rrap's Fleshpool, 2004: a highly stylised digital video depicting the female body becoming a molten pool of its former self. While some artists made works out of images and materials that inspired the viewer to want to touch them, (even eat them) other works were designed to make us grimace, turn away and shudder. It was a full body experience and rightly so.

Sarah Jane Pell is an Australian Live Artist, researcher and Occupational Diver. Her work focuses on the nexus between occupational diving and contemporary performance practice, and the ideas that have grown out of an experimental process of exploring life support systems conjured up by experiences with aqueous environments.

Philosophically, Pell's work addresses the mediated forms of experience and habitation - wet and dry - central to her practice and interest in, and investigation of, biological, ecological, technological, metaphysical, aquatic, political and societal states of being. The artist has, however, also consistently produced new media works dealing with a range of interests in other media and sciences, including land-based installations of pneumatic technologies and the art of manipulating systems through biotechnologies and space arts.

Pell has exhibited performance and published widely. She submitted a PhD Visual Art (2005) Edith Cowan University leading to a scholarship from the International Space University, Strasbourg (2006-2007)