Individually, we identify as a playwright, a choreographer/performer, and a director/scenographer.

Our projects have tackled a variety of themes and situations, but most tend to focus on power-relationships and the mechanisms of silencing individual voices. The performance outcomes of M(other) are based upon the dislocated experiences of a mother with Alzheimer's and her daughter who subsequently questions her own identity. This scenario is juxtaposed with sections from Algernon Swinburne's 'The Triumph of Time' which was written in the 1860s. 'The Great Sweet Mother' of this poem became an ambivalent 'Essential Mother' in our performances.

Our research always originates with questions surrounding the relationships between word-based text, visual imagery and movement in performance. Behind, and integral to, this have been wider research questions related to creative methodologies. In particular, we have been attempting to tease out a working model for collaborative theatre practice.

The M(other) project attempted to demonstrate and articulate the following negotiations:

∙ of different working practices and assumptions due to discipline specificities;

∙ of individual and collective goals for performance;

We did this through the making of two artistic products: M(other)1, a live performance integrating video projection which was produced in Greece in 2002, and M(other)3, a 6 minute digital video. All video work was made in collaboration with visual artist Russell Frampton. During our making processes, we deliberately blurred our traditional discipline-specific roles in an attempt to develop a specifically non-hierarchical collaborative process which may be considered 'feminist'.

To disseminate our findings, we developed performative conference presentations that have acted as the basis of this electronic journal article which has been created especially for Body Space & Technology. In it, we theorise from our practice in order to expose and analyse artistic decisions. By revisiting and returning to moments in which our interactivity is apparent, we hope that the processes at the heart of our research enquiries can be observed and analysed by new audiences.

In this article you can read our individual and collective perspectives plus engage with performance traces and documentation such as scripts, still images, and video. You can also download M(other)3, which - far from acting as documentation of a performance - is a creative expression of our research into the collaborative relationships between imagery, technology, words, space, and performing bodies through the project's central theme of non-maternal motherhood. 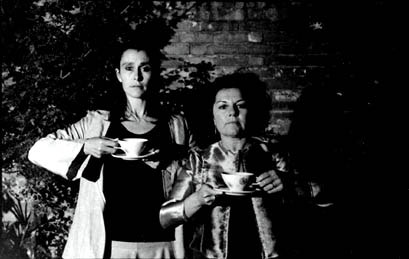 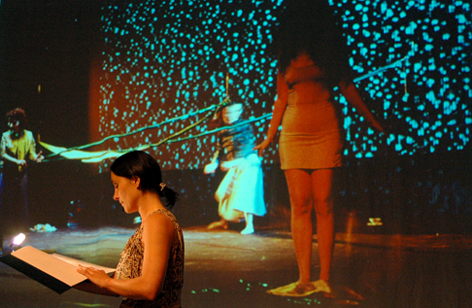 Roberta Mock is Associate Dean (Graduate Affairs) for the Faculty of Arts at the University of Plymouth where she also teaches Theatre & Performance. She has published articles in a range of performance and women's studies journals and is the author of Jewish Women on Stage, Screen & Television (Palgrave Macmillan, forthcoming). She is the editor of Performing Processes: Creating Live Performance (2000), Walking, Writing and Performance: Autobiographical Texts by Deirdre Heddon, Carl Lavery & Phil Smith (forthcoming) and an ongoing series of performance texts (all published by Intellect Books). Her current work focuses on Jewishness in performance art contexts.

Christine Roberts is a Senior Lecturer in Theatre & Performance at the University of Plymouth. Five of her plays have been performed in national and international venues and she is the author of Tormented Minds: Three Plays (Intellect, 2003) and Mangled (Minerva Press, 1997). Most recently her play Kicking District, which premiered at the Courtyard Theatre, Hereford in 2004, has been selected by ADVA Devon (Against Domestic Violence and Abuse in Devon) to tour a range of venues to raise awareness of the complexity of issues surrounding domestic violence. In addition to this, she has also written for international journals and conferences on themes relating to theatre and politics.

Ruth Way is Subject Leader of Theatre & Performance at the University of Plymouth. She studied at the London School of Contemporary Dance , with Merce Cunningham in New York and most recently with dance philosopher Sondra Fraleigh. Ruth has taught and performed at the Laban Centre for Movement and Dance, for Dublin Contemporary Dance Theatre and internationally with Earthfall Dance. She has recently been awarded a major Arts Council of England award to develop her practice as a dance film maker and choreographer in collaboration with visual artist Russell Frampton. Their previous film, Enclave, was published in Body Space & Technology (volume 5).