A Klee painting named 'Angelus Novus' shows an angel looking as though he is about to move away from something he is fixedly contemplating. His eyes are staring, his mouth is open, his wings are spread. This is how one pictures the angel of history. His face is turned toward the past. Where we perceive a chain of events, he sees one single catastrophe which keeps piling wreckage upon wreckage and hurls it in front of his feet. The angel would like to stay, awaken the dead, and make whole what has been smashed. But a storm is blowing from Paradise; it has got caught in his wings with such violence that the angel can no longer close them. This storm irresistibly propels him into the future to which his back is turned. (Benjamin,1940)

'Digital art has its roots not so much in academies of art as in military defense systems.'(Rush, 1999: 171) 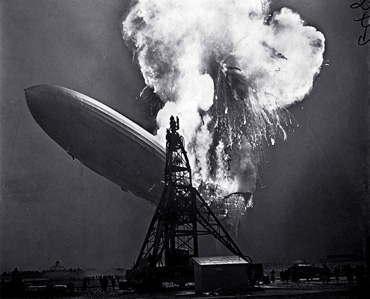 Of course the Hindenburg exploded. How could it have done otherwise? With that much hydrogen, static electricity, idealism, promise, and live coverage, what else could have happened?

The technical disaster is perfect in hindsight. The 20/20 vision of history lays it bare: Desire, foolish hope and misplaced facts culminate. The technical disaster is perfect in its absolute inversion of its idealized projection: Three Mile Island; Love Canal; Thalidomide; Chernobyl; Bhopal. And beyond, our North American cultural imaginary is rife with imagined carnivals of slaughter that the entertainment engines of suspense/horror/action films pump out: Hal of 2001; Alien's profoundly corrupt maternity; the Terminator's terrible paternity. In each instance what is most jarring is humanity's ability to be obliviously naive and fatally unaware of the seeds of disaster that culture midwives into fruition.

The technical disaster is not an 'accident'. Its outcome is less accidental, and more a logical conclusion to a series of steps. Our human fallibility and our lack of foresight turn it into an almost magical event, as if a rational, eternal system has suddenly lurched out of control. Yet a series of instances occurs and the disaster is just the next logical step to a series of actions. And we rub our eyes, blinking in wonder at the churning mouth of an unfolding catastrophe. 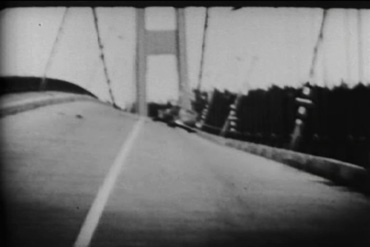 And then we watch it in replay. Media is the perfect cohort to technical disaster, locked in an eternal loop of Echo and Narcissus. Buddhist artists make art to create Karma, to unleash positive forces into the world-it assists healing, elides war, and makes new perspectives possible. Unlike the dark fascination of the media that normalizes the horrific, makes slaughter banal, and militarizes our collective, cultural imaginary. Media is the opposite of prayer, dispersing intent into calamity. Angels, bodhisattvas and other entities observe as humanity seesaws along in its oblivion, canonizing its half-baked ideas. 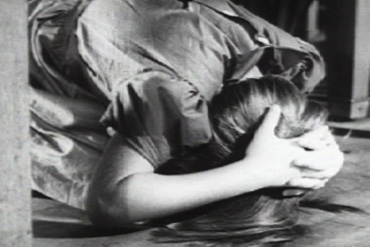 The notion of contemporary, critical arts and a reckoning with the technical disaster posits the role of the artist as watchdog, soothsayer, prophet or recalcitrant gravedigger. How are art practices presenting an alteriority to mainstream media and its twin motives of seduction and terror? Do these works propose a stew of pharmacological disaster, ecological mayhem, geopolitical despair, and a fool's hope?

Benjamin, Walter. (1940) Theses on the Philosophy of History in http://www.wbenjamin.org
/passageways.html.

Donna Szoke is a graduate student working in interdisciplinary collaboration. She has teaches video for artists. Donna has collaborated with numerous artists in various creative, technical and educational capacities, on work shown locally and internationally. Her art practice includes sculpture, kinetics, installation and video. Recently she has begun to curate as a means of visual and conceptual research.