Now that Orwell is often brought up - making his come back thanks to the success of reality shows - art also, tragically, had to follow this new trend, suddenly feeling the urge to express itself on this "new" event. On this matter, many artists started working on the concept of mediatic control. Werther Germondari's OFFICE is certainly not part of this context. The dynamic, the evolution and the very nature of his performance doesn't belong to the obsessive controlled world of 1984 and not even to Bradbury's Fahrenheit 451. Instead it can be traced back to the grotesque and dramatic Kafka's atmosphere.

Generally speaking Germondari's work focuses on hidden elements brought to the scene in a goliardic tradition style that, in the pictures of Gioco di Sguardo (Glance Game), takes the form of an awkward scanning eye hiding its real nature of deflated balloon. In this way it underlines the artist's attitude in seeing things thoughtlessly - as it is in human nature - sometimes overwhelmed by a wrong perception of reality and a dull daily routine. In this framework OFFICE is a good example of an artistic research that lays the ground in a journey already started. All the elements are there: a constant effort towards a formal perfection, already present in Werther's photography; the observation of reality through an ironic lens pointing at the futility of a circumstance - within a work scenario - that paradoxically finds its substantial expressive entity in its superficiality; the game of performing in its perceptive multiplicity.

Bending down on himself, wearing a traditional working suit (not as ambitious as that of a white collar) Werther Germondari begins a sterile working circle/circuit miming an empty and repetitive work action. Sterile the worker, sterile the operator, sterile the actor but not the audience. Using a rhyme game, close to the irony hidden within the linguistic references and double meanings of Germondari, we could define " tragic" the story around which the character in OFFICE revolves. Loving repetitive performances, as in Werthicalizz'azioni (Werthicaliz'actions), the artist stages the physical and mental constraint of a situation that finds the reaffirmation of its identity, within its total vacuity and social acknowledgement. Therefore it needs the presence of an audience or even better a public perception to be legitimized. Here we have an overlapping of different viewpoints: that of Werther's filming the wheels of his office swivel chair moving; that of the webcam pointed at him; that of the Gioco di Sguardo's eye staring at the audience. The audience itself has got three viewpoints: the direct perception of Werther's action; the perception of the images transmitted on the monitor by the webcam which is shooting Werther who is filming; that from the monitor transmitting the video shot directly by Werther. The result is a crescendo of puzzle games in which the traditional sarcasm of the artist is less poignant, but maybe more ferocious than ever. 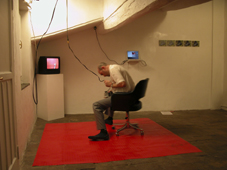 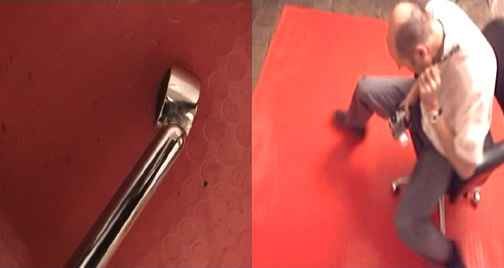 FEDERICA LA PAGLIA is an art critic and independent curator, living and working in Rome. Whilst studying law at the " La Sapienza" University in Rome, she considered moving into the legal and economic side of the visual arts. However, she began to work as an assistant curator, at institutions such as the French Academy in Rome, and consequently forged a career for herself in this area. Federica collaborates with the Chilean Embassy in Italy (cultural office) and writes for www.exibart.com, the highly regarded Italian art web site. She also contributes to Exibart. She has a number of texts and articles published in art magazines and catalogues.