Kate Pendry is a British performance artist, currently resident in Oslo. She is a multi-artist/performer. Works include ‘Dead Diana’ (Oslo, London, Copenhagen, Riga, Stockholm, Belgrade), “The Dead Celebrity Diaries” and “Marilyn Peepshow” performance/installation and Internet projects. She most recently debuted with her first solo exhibition (including performance) “My Mistress Anarchy... tales from a wicked child” at the Kunstverket Galleri, Oslo. This was a site specific installation using sound/photo and sculpture, reflecting on the politics of childhood and the dark underbelly of infancy, including sexuality, and children who kill. Images include Hitler and Diana, Princess of Wales as babies, as well as autobiographical material to underscore the artist’s relationship to the theme of ‘angels and monsters’. 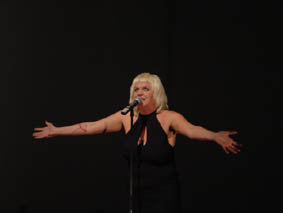 Sex In The War Zone:
A one hour spoken word piece, using real-time voice manipulation
effects and some blood letting. The piece is about the artist's
recent journey to Sarajevo and Kosovo/a and addresses the very taboo
subject of (post) war-tourism, and the eroticism that
'westerners' experience in these situations.
dur 55 mins.

Sex In The War Zone part 2: Belgrade
In this sequel the artist describes her experience performing
the original 'pro-Kosovo' Sex In The Warzone performance in Belgrade,
Serbia at the end of 2002.
She meets the mafia, corrupt police officers, the underground queer
milieu and representatives from the United Nations. and comes to some
startling conclusions about sex and war tourism.
dur. 50 mins

A controversial performance piece involving real-time voice manipulation where the artist 'brings back' Diana, Princess of Wales from her hellish paradise, populated with so many other dead celebrities, who also appear through the artist's body and voice. 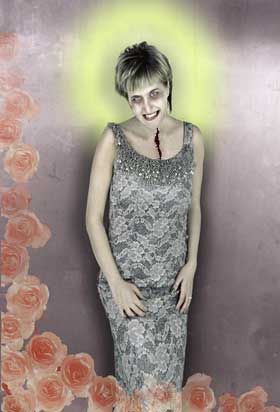 Peepshow Marilyn: Gentlemen Prefer Dead Blondes...
A poetic and ambient performance where the artist (as Marilyn in the moment of her death) uses real body modification in the form of sixteen fishhooks through the flesh, to dramatise the significance of both the artist and Marilyn's pain. This has become a durational living installation lasting up to twelve hours, and is extreme art. 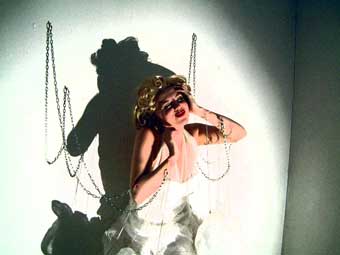 My Mistress Anarchy... Tales from a wicked child Performance/Installation using photography and sound. The piece explores the dark sides of childhood and includes fifty child portraits of famous and infamous killers, victims and 'A' celebrities. The performance includes extreme art practises to illustrate the eating disorder bulimia, and the artist asks the question: "At what point do children turn bad...?"

Most recently co-curated the controversial ‘Stunt Club’ exhibition in Oslo featuring over 70 international artists during a 6 week period.

Voiceover work ranging from TV documentaries to video games too numerous to mention :-)

As a writer Kate Pendry has had seven plays produced in Norway in the last five years, including Monster Madonnas for The Oslo Stage Company, Cabaret Pigalle (ØJ Prod, Pigalle Nattklubb), Ethnic Zoo for the Norwegian Red Cross; I Can Also Sing The Blues, a play about racism for Nordic Black Theatre.

I Can Also Sing The Blues:

Kate Pendry continues to give numerous workshops and lectures on diverse themes including:

Kate Pendry suggests you may also be interested in the work of Stahl Steslie, her colleague, as he is working with interactive body interfaces: