A huge head being excavated by a Victorian explorer, a dead man lying face down in a swimming pool, a dark room lit only by the flashing of hundreds of electronic gadgets…. it was all part of this year’s Venice Biennale.

A record 77 countries were represented at the Venice Biennale this year, and there were 44 collateral (off site) events, also a record number. Visiting the Biennale was therefore something of a test of endurance, with shoe manufacturers the clear winners.

The main exhibition sites, the Giardini and the Arsenale alone cover a vast area (think about twenty football pitches), but at a push you can cover both in a day or two in what is the art lovers’ equivalent of speed dating.

The collateral events – spread in all manner of nooks and crannies of the city – are a charm unto themselves. They require a lot of map reading, then re-reading, and a willingness to ask the locals for orientation now and again – but once found often rewarded the seeker with hidden delights, not to mention seeing parts of Venice you would never normally find or be invited into.

The tree-lined Giardini and its impressive pavilions is where each country parades its best artist or artists, but this year the Arsenale – a former shipyard and navel depot, with its cavernous former storage spaces, was perhaps the real tour de force.

You entered into a dark chamber which contained streams of golden light traversing along groups of threads of string suspended in diagonals from roof to floor. The lighting is so subtle that for much of the work you can only see the shafts of light across the space. If heaven has an antechamber this is it. All that is needed is a host of angels. This is the somewhat obscurely named Treia, 1,C by the late Brazilian artist Lygia Pape.

From there you moved into the anarchic world of Michelangelo Pistoletto with the work Twenty Two Less Two, which continues his fascination for sense of identity using mirrors. The space housed 20 or so huge mirrors on all four walls which he proceeded to smash with a sledgehammer on two well attended occasions. The end result was a room of beautiful destruction. Each mirror broken in its own unique way. Some shedding shards liberally, others seemingly resisting destruction with only intriguing dents across their surface – did the artist tire, or did he deliberately apply less force? Is destruction an act of beauty or futility?

Futility and dislocation is never far away as you move through the many other works. Haegue Yung hung a jumble of wires and various forms of lighting to make an enchanting installation of electronica. Nearby Moshekwa Langwa pursues a similar path with a floor strewn with many-coloured cotton spindles and toy cars and trucks. It sounds like a mess but its careful arrangement makes it compulsive viewing, as you seek out meaning that refuses to be teased out easily. But your brain has never processed something that looks quite like this, and that perhaps is the point. Just enjoy the sensation as you try to make sense of the mash-up that is a cotton thread and toy cars universe in miniature. 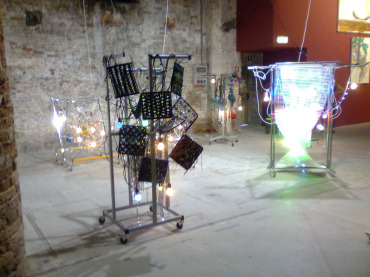 There was much else to enjoy in the half mile of studio space that makes up the first part of the Arsenale but one of the real joys of the Biennale is also the hardest to get to. You have to queue up for a free two-minute boat ride to a separate section (part gallery spaces, part working spaces) to see a huge installation by Jan Fabre. He had mounted a huge (20ft wide approx.) anatomical head in profile in a sandpit. Standing on the head is a human figure, dressed in Victorian garb, digging at the open brains with a garden spade. It’s all set up like an archaeological event as if archaeologists made such finds on a regular basis. 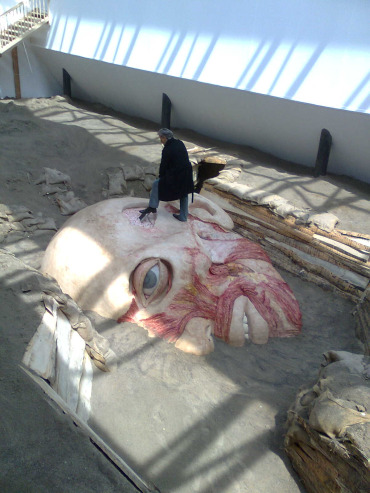 Jan Fabre 'From the Feet to the Brain' at the Arsenale Novissimo
(Photo: Ken Young)

But this work is a walk in the park compared to what you see in the next section of the space viewed only from a gallery 20 feet up. Here a young man lies on his back on a bed of a 150 scattered tombstones bearing the names of insects that apparently refer to artists, philosophers and writers. All well and good but on closer inspection his erect penis protrudes from his unzipped jeans and it becomes clear that he has sowed his seed generously hosing the aforementioned tombstones. In notes the artist said the work is a self-portrait depicting his relationship with those who support and influence him. Don’t laugh, this is the wonderful world of Jan Fabre, hidden far away from the easy access of the ‘participating countries’ in the Giardini.

So much for the Arsenale.

Back at the tree-lined avenues of the Giardini there was fun to be had seeing Steve McQueen’s new short film at the British Pavilion – if you managed to arrive early to get a ticket to see it that is. Most people I met (including a party of 50 UK curators) were thwarted in their efforts to get tickets, as they were only being provided between 10-10.30 at which point the British Council staffers were left with one choice only – apologise to everyone coming to the pavilion and tell them to turn up the following morning. Ho hum, by all accounts it’s an intriguing film exploring what occurs in the Giardini after the show leaves town, suitably laced with ambiguity and intriguing close-ups. But if all countries were to adopt such a restrictive entry strategy it would be a pretty poor event. Maybe the British Council should have made it available at Venice’s only cinema once a day too. 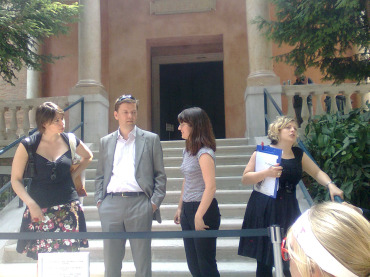 Close by in the French Pavilion Claude Leveque’s Le Grande Soir consisted of a huge cage shaped like a cross which you prowled inside of. The walls and ceilings were covered in circus glitter with dressing room bulb lighting at the edges. At the far ends of the cage corridors were black flags blowing in artificially created wind. Meanwhile a low ominous humming sound reminiscent of a David Lynch film soundtrack pervaded the space.

At the time of the intended closing of Guantanamo Bay, the work raised questions about nationhood, ethics and – that old cliché - man’s inhumanity to man. If we imprison others inhumanely does our own sense of nation die? Are we no more than circus bosses exploiting our sub-human charges for our own entertainment? The spectre of Abu Ghraib hovered menacingly over the work. But perhaps of all the works in the Giardini this one seemed to divide opinion most. There was something about it that you either left your moved or stone cold.

Of the collateral events highlights include Mexico’s Teresa Margolles whose work focused on violent deaths and their investigation using a series of rooms of a pallazo to subtly unravel a fictitious mysterious murder; Montenegro’s DADO presented a mixture of found objects refashioned into a delicious post-armageddon mash; finally a delight was in store for those who dropped into the palazzo housing exhibits by Iceland and Singapore. Iceland gave us a recreation of a bohemian artists studio, where work was created as you watch – including a bored-looking male model dressed only in swimming trunks, who apparently was posing from July to November, poor soul. Beer bottles and vinyl records littered the floor, to complete the (un)reality of this performance/installation.

Meanwhile Singapore put on an unassuming show that took you on a tour of its cinema history as a means of exploring issues of identity, culture, and belonging. Complete with photographs of old cinema locations and re-enactments of key scenes from seminal films (local adaptations of Hollywood blockbusters), you inhabit a world that is part museum, part distorted reality. It showed Singapore’s contemporary art scene is keen to explore issues of identity while celebrating an art form that is becoming increasingly a focus of cutting edge artists. It may not be intentional but the choice of subject matter is bang on the money if you subscribe to the view that film is one of the rising stars of the art firmament.

So was the Venice Biennale any good? It’s hard to please the massed ranks of the world’s art media and there were as many plaudits as grumbles. The truth is visiting Venice and the Biennale is an unforgettable experience where some superb art rubs shoulders with some less worthy art in a breath-taking location that defies the laws of gravity and confounds all reasonable planning laws.

Yes, Venice has too many tourists and the Biennale has more art than you can eat in a year, but who cares? There is nothing on earth like the Biennale and you only have to imagine the millions of man-hours of effort globally that go into pulling it off to know that it’s a creative explosion on a nuclear scale. My advice is, if you missed it this year, make a definite resolution to visit in two year’s time.

Ken Young is a London-based journalist covering art, new media and technology. He is co-founder of news site newsnow.co.uk and was formerly editor of Internet World magazine and was a presenter on Sky TV's Computer Channel. He has a degree in psychology from Newcastle Northumbria University and has written for The Times, The Financial Times and The Guardian. He is currently developing a London focused contemporary arts news website called Art Newsire at www.newswire.co.uk, to be launched in March 2010.